Mrs. LeBlanc is the mother of Sherry LeBlanc and wife of Dr. LeBlanc. Both she and her husband were murdered by the mysterious organization of Iliaster, to acquire the special "Z-ONE" card her husband had designed. Dr. LeBlanc had discovered what Iliaster had been up to using the Infinity device. Clark Smith, from the Momentum Express Development Organization, was then responsible for allowing she and her husband's murders. In the dubbed version they are instead kidnapped by Iliaster and sent to a currently unknown secret location, though it's implied that they were also killed in the dub. 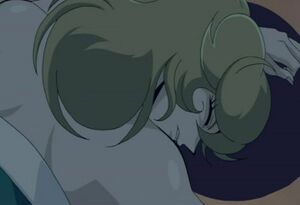 Mrs. LeBlanc, shot dead by agents of Iliaster. (This is cut from the dub)
Retrieved from "https://yugipedia.com/index.php?title=Mrs._LeBlanc&oldid=1638390"
Categories: