Ms. Chono (蝶野先生 Chōno-sensei) is a character in the Toei Yu-Gi-Oh! anime. She is the anime incarnation of Ms. Chono, from the Yu-Gi-Oh! manga.

Ms. Chono was a teacher at Domino High and whose beauty is a strong talking point among male students and teachers. Her beauty is due to an immensely thick layer of make-up, which covers her true ugly face. She enjoys dating, as it gives her the chance to dump men and see them break down. Chono is strict and regularly attempts to get the rules upgraded to stricter terms which would include the banning of all personal items and an increase in punishment for violations.

When Anzu Mazaki complained about the strictness of the school, Chono asked Anzu to collect signatures from other students in a petition asking for laxer rules. Unbeknownst to Anzu, Chono had recruited some boys to rip up the signature paper with the exchange that she would erase their rule-breaking from their permanent records for doing so.

After Yugi Mutou witnessed the meeting, his other self, Dark Yugi emerged and challenged Chono to a game involving two mirrors and being blindfolded. 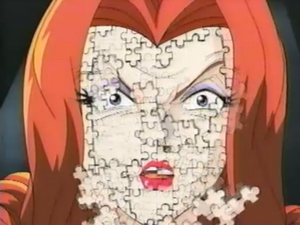 Realizing that Chono had cheated and used her position to hurt Anzu, Dark Yugi inflicted a Penalty Game, causing her beautiful appearance to fall off like jigsaw pieces while finally revealing her true face which was so dry that it resembled a mummy. Humiliated, Chono fled the classroom, crying and covered her face to avoid being detected.

When she reacted angrily to a proposal, insisting things had to be stricter, Chono's newly make-up began to crack, causing her to flee the room while her male colleagues remarked that there was more make-up than skin on her face. She was later seen in the bathroom, desperately trying to preserve her make-up while demanding to know why it wouldn't stay in place. It's presumed that Dark Yugi's Penalty Game is a permanent effect and as such, whenever Chono attempts to lie, her face will continue to crack. [1]

She later appeared with Ryuichi Fuwa and had her face cracked again although her ugly self was not seen. It was used to introduce the next scene instead.[2]

Chono appeared again teaching a class. However, as she did not do anything bad, her face did not crack.[3]