From Yugipedia
Jump to: navigation, search
For other versions of this character, see Ms. Dorothy (disambiguation).

Ms. Dorothy, known as Tome-san in the Japanese version, is a school staff member who works and owns Duel Academy's card shop.

Though Dorothy has no clue how a Duel works, she has a satisfying job owning the card shop. She can seem odd sometimes by certain students, particularly the boys, but is well respected by pretty much everyone. She has a perky, sweet, and friendly personality and she is very grateful for helpful people.

Ms. Dorothy gave Jaden Yuki "Transcendent Wings" and "Winged Kuriboh LV10," as a reward for him helping her out earlier in the episode. Since then, Ms. Dorothy has become well acquainted with Jaden and his friends. It is sometimes hinted that she and Chancellor Sheppard are romantically attracted to each other.

In the dub, her nickname is "Miss Duel Academy." 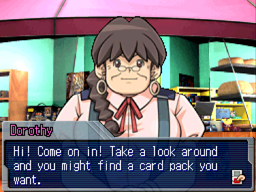 Dorothy attends the card shop during weekdays, and can be found in the Forest during the weekends.

The only card shown in her Deck in the anime is "Marshmallon".