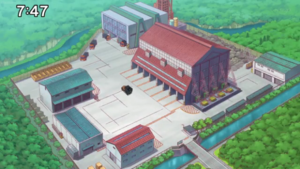 Mutsuba Heavy Machinery Garbage Collection Site #8 is a large garbage collection site. It is located in the woods at the outskirts of Mutsuba Town, standing right by the river.

The site possesses various waste disposal methods. After the collected garbage are dumped and separated appropriately, they are to be either crushed, frozen, or burned, depending on the type. All the processes seem to be at least partially automated with a lack of human workers for most of the devices, as Chupataro Kaburagi can freely lure and entrap Yudias Velgear using some of them.

The Valvelgear was taken to the collection site when Yuamu Ohdo accidentally let it fall into a collection truck. Around the same time Chupataro Kaburagi led Yudias Velgear here, claiming he was teaching him about Trap Cards, while secretly trying to actually trap him. Yuhi Ohdo, who was finding the missing Yudias, caught a glimpse of Tell Kawai, who was taking a bath at the nearby river. Despite wanting to confront the kappa alien for stealing his Earthdamar, Yuhi backed off and decided to prioritize saving the citizens inside the Valvelgear instead, which were in danger of being burned by a garbage disposal unit. When he returned after everything was resolved, the kappa was already gone.[1]