Natsumi is a character appearing in the World Championship video games. She is identical in appearance to Olivia, and she is the mother of Hana.

Natsumi appears in the hideout where the player is staying and challenges Yusei Fudo to a Duel.

Natsumi can be found in the Port after Syd and his henchmen are defeated. The player can challenge her to Single Duels or Tag Duels, teamed up with Hana. 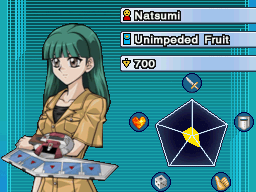