As a Single Duel opponent, it is unlocked by finishing Story Mode's Chapter 5. 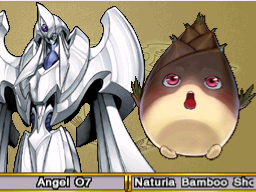