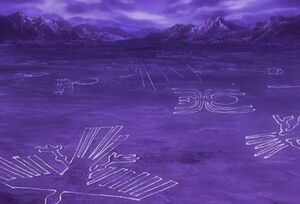 The Nazca Lines are a series of geoglyphs located in the Nazca Desert in southern Peru. In the Yu-Gi-Oh! 5D's anime, they were formed after the Earthbound Immortals got sealed in the Earth.

The seven lines associated with the Earthbound Immortals also appear on the arms of the Dark Signers as dark marks, with the exception of Rex Goodwin, who had the condor mark on his back.

The people of the Incan civilization of the Stairway to the Dragon Star were threatened by wicked disturbances in the earth. In response, the Star Dragon King prayed to the Dragon Star for help. The Dragon Star answered their prayers by sending the Crimson Dragon, who, along with five dragons, battled the evil incarnate Earthbound Immortals.

The Dragons were able to seal the evil beings in the earth, but in the process, "Uru", the spider god managed to capture one of the Crimson Dragon's servants, Ancient Fairy Dragon. After the battle, the evil gods were finally sealed within the earth, forming the Nazca Lines, with each line taking the shape of the Earthbound Immortal sealed within. 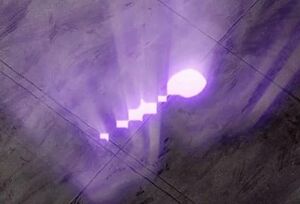 Five thousand years later, as the Dark Signers continued their battle with the Signers, the lines began disappearing as the corresponding Earthbound Immortals were summoned. Any time a Dark Signer engages in a Shadow Duel, the corresponding geoglyph materializes around the field.

Whenever the geoglyphs appear, tragedy is sure to follow. For example, when a Dark Signer summons an Earthbound Immortal, casualties have occured not only within Satellite, but within New Domino City as well. This is because the Nazca Gods' summoning requires human sacrifices and those who have been sacrificed have ended up inside the geoglyphs. Because of this, hundreds of residents have disappeared from the city.

After the battle against the Dark Signers ended in their defeat, the Immortals were re-sealed here and with this, the lines themselves once more reappeared.

When Jack fought the Familiar of Red Nova, the Red Nova geoglyph appeared. It then disappeared after the Duel.