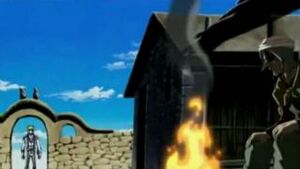 Jack at the entrance to the village.

A village in the Nazca region neighboring where Greiger was staying was terrorized by the Crimson Devil, Red Nova and his servant, the Familiar.[1]

According to the villagers, wicked spirits flew into their livestock killing them. The villages eventually all fled, with the exception of one.[1]

Jack Atlas visited the village, while angry over the result of his Duel with Max. Here he met the villager who stayed behind. The villager told Jack that everyone else had left and kept repeating that this was the work of the Crimson Devil. The Familiar then appeared and taunted Jack into chasing him. After running around the village, the Familiar possessed the villager and told Jack to meet him at the shrine to gain the power he desires.[2]