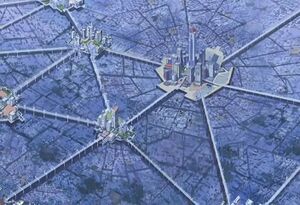 New Domino City, known as Neo Domino City (ネオ童実野シティ Neo Domino Shiti) or City in the Japanese version, is an intended utopia. It is built near the old Domino City, which has now become the rundown Satellite plant. Residents of New Domino live in luxury and feed off the labor of people living in Satellite. In the dub of Yu-Gi-Oh! ARC-V, the City in the Synchro Dimension is also known as New Domino City. In this version of New Domino, characters such as Jack Atlas, Crow Hogan and Lazar appear as different universe counterparts to their 5D's versions.

New Domino is connected to Satellite by a single pipeline. According to Yu-Gi-Oh! 5D's, Yusei Fudo and Jack Atlas are the only people to ever travel through the garbage pipe to New Domino City.

However according to Rex Goodwin, the connection with Satellite being the pipeline is due to the events concerning the Dark Signers. Yusei tried to convince Goodwin to evacuate the citizens of Satellite, but Goodwin states he can't or the current situation would worsen due to the Dark Signers seeking the residents of New Domino city if he did what Yusei asked, which angers Yusei. However, it partially fails when Misty Tredwell and Carly Carmine become Dark Signers in New Domino, although they go to Satellite after their Duels conclude.

However, before the final battle between them and the Signers can finally commence. Yusei requests to Goodwin that once they are defeated, he will then finally connect the city and Satellite with the help of Satellite's legendary Daedalus Bridge. Goodwin accepts.

The monument symbolising the unification of Satellite and New Domino City.

After Goodwin dies when he is defeated by Yusei in a final Duel as one of the Dark Signers, a new and enormous bridge is constructed which finally connects the city with Satellite.

Because of this bridge, it is said that the city has changed significantly, as a highway has been able to be constructed which connects the city with other parts. Also because of this same highway, Turbo Duels can now occur freely.

All the highway lanes have been built so that they can elevate when a Turbo Duel is initiated, thus allowing mainstream traffic to pass by without disrupting the Duel. Of course, a Turbo Duel on the highway must first be granted authorization by Sector Security.

A monument has been built in the center of all the bridges connecting Satellite to New Domino City. It symbolises the unification of Satellite and the city and its design makes out an infinity symbol when looking at its reflection in the water. This monument is most likely designed this way by its designers.

According to Lazar, such changes are the ones being celebrated on the upcoming and prestigious tournament, known as the "World Racing Grand Prix".

During the WRGP tournament, the city is severely damaged by the Diablo fiasco, thus halting the tournament for a while for repairs.

During the Duel against Aporia, the city is further damaged and many civilians are harmed as the attacks from "Meklord Astro Mekanikle" are real. Also during Yusei's fight with Z-one, part of the Divine Temple falls on the city, and causes some Damage.

The gigantic fortress known as the Divine Temple is revealed to be made out of crumbled buildings and structures that compose the city in the future.