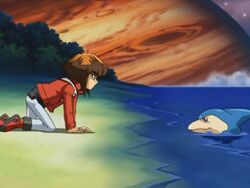 It is introduced in the second season as a part of the universe inhabited by the Neo-Spacians, part of which orbits around Jupiter. Jaden Yuki was transported to Dolphina, a planet inhabited by dolphin-like creatures, such as Aqua Dolphin. There Aquos make him familiar with the battle between the light and the darkness, good and evil, and the upcoming threat, the Light of Destruction. Aquos also explained him that he is destined to fight the Light, as he wields the power of Darkness of Justice. At that time, Neo Space was invaded by a Dueling machine, an emissary of the Light. Jaden found Duel Monsters cards in a crushed KaibaCorp satellite, which he designed as a child, including "Neos", "Neo-Spacians" and "Chrysalis". Using those cards as his new Deck, he successfully defeated the emissary, but his fight against the Light has just begun. Upon his victory, he was brought back to the Earth.[1] As he was fighting the Light, the Neo-Spacians would join him in that fight as Duel Monsters cards. They also stood by his side in his fight against the Light-affected Yubel[2] and in the final Duel with Nightshroud[3].

Neo-Space is inhabited by Neos and the Neo-Spacians, each representing a different Attribute.

Elemental HERO Neos is the protector of Neo Space.[4]