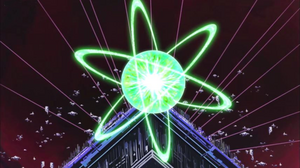 The Neuron Link greatly resembles the orb from Yu-Gi-Oh! Duel Links. At the start of the Duel, and every time Bohman activates his Skill, rings expand throughout LINK VRAINS, and lightning tentacles pierce any Avatar's head inside LINK VRAINS, absorbs their consciousness, and converts them into a Data Storm. It also prevents Avatars from logging out.[1] The Neuron Link is initially green, but becomes black after being damaged. When the Neuron Link is disabled, unaffected Avatars in LINK VRAINS can logout. Because it is composed of an Ignis algorithm and thus has a very complex source code, it takes time to destroy it, but Bohman demonstrates that he can easily repair it at any time, either using the data of the people he captured or that of LINK VRAINS itself.[2] However, this seems to only last for the duration that he uses his Skill and Bohman seemingly loses the ability to hear the voices of the people he has absorbed.[3]