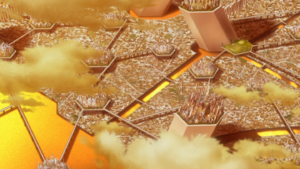 New Domino City's society is competition based - the "winners" gain everything, and the "losers" lose everything. The top 1% of the population, known as Topsiders, is made up of the "winners". They control 99% of the city's wealth and reside in a magnificent cityscape build high above the slums of the city. The remaining 99% of City's population, referred to as Commons, is made up of the "losers", and resides in those slums.[1] Its population is around 10,000,000.[2]

Despite both Commons and Topsiders being equal in social status on paper, in reality society and the system heavily discriminates against Commons. New Domino is patrolled by Sector Security and according to Yugo is known to serve the interests of the Topsiders. Much like with Satellite, if a Common is found in Topsiders-exclusive areas without authorization, Duel Chasers will immediately be deployed to duel and arrest them. Despite the wide discrimination against Commons, it is possible for a Common to gain acceptance among Topsiders by virtue of becoming a winner, as this dimension's Jack Atlas as widely known to have risen from the slums after winning the Friendship Cup.[1]

New Domino City also has separate lanes for Turbo Duels, though its highways are also capable of erecting energy barriers to divert incoming traffic away from the Dueling lanes so that the Turbo Duelists can enter the dueling lanes more easily.[3]

New Domino City is introduced as the main setting in the Synchro Dimension in Yu-Gi-Oh! ARC-V after the Arc League Championship in the Standard Dimension concluded with the formation of the Lancers. The group traveled to the Synchro Dimension to seek allies against the Fusion Dimension's Duel Academy, but received a harsh welcome from Sector Security,[1] turning into fugitives and eventually being forced to participate in the Friendship Cup by the High Council to prove their power and reliability as partners. The Lancers soon become players in a game of power between Sector Security's chief Jean Michel Roget, the Council and the Commons, with the threat of Duel Academy present in the background.

New Domino City retains Duel Runner technology, though they also use the Duel Disk technology common among the Duelists in ARC-V.