Nico is West's sister and a resident from Crash Town later Satisfaction Town. 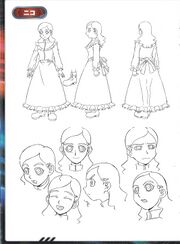 After Kalin Kessler, Yusei Fudo and Radley are taken to the mountains to work as slaves like their father, Nico helps West take Yusei's Duel Runner to him, without anyone seeing them. This happens while Malcolm's family is distracted with the celebration.

Later they meet up with Kalin and Yusei, having managed to escape from the the excavation site. As Kalin asks them about Yusei's Duel Runner, Nico tells him that they can use it to get out of town.

However, Lawton comes looking for the missing Duel Runner, so Yusei tries to attract his attention while West, Nico and Kalin escape. The three of them, while trying to escape two other members, end up returning to the excavation site.

In there, the children find their father, Sergio. They all manage to elude their captors, but in the end, Jordan has to sacrifice his life in order for them to successfully escape, asking Kalin to look after his children as a final request.

After this, West, Nico and Kalin end up meeting with Lawton and Yusei, but due to a dynamite planted by Lawton, they all got separated, with the children ending up in Lawton's possession. They are pleasantly surprised though, at the arrival of the still alive Yusei and Kalin, who have come to put a stop to Lawton's reign on the town.

She is currently residing under the care of Kalin with her brother as they begin to build the town back up to its former glory. 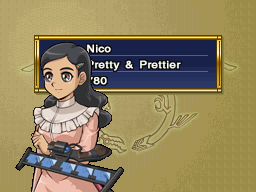 Nico, in Over the Nexus

Nico appears in Yu-Gi-Oh! 5D's World Championship 2011: Over the Nexus as a friend of the player and Toru. After finishing the main storyline, she can be faced in Tag Duels, partnered with West, and is a possible partner for the player.