Nicolas is a member and the captain of Team Catastrophe. Like the other members, Hans and Hermann, he has a criminal mark.

Nicolas is first seen with his teammates, celebrating their automatic victory against Team Unicorn due to two of their members crashing. In episode 104, his team's backstory is explained; they come from an area of Satellite that has not been benefitted yet from its new union with Neo Domino City, to the extent they see no point in it. After nearly crashing into Primo, they were given dark cards that would "make them become Kings". Hans and Herman objected that they shouldn't be using something like that to Duel, but Nicolas ignored them and said that he would do anything to get out of the dump of a home where he lives.

In the WRGP, Team Catastrophe is first seen by Team 5D's smirking at the injured Team Unicorn members. Seeing this, Team 5D's investigates Team Catastrophe and learn they have made every opponent they faced crash in order to proceed through the WRGP. During the two teams' match, Nicolas is the second wheeler for Team Catastrophe, replacing Hermann after he is defeated by Crow. He faces Jack and tries to finish him off immediatly with one of their dark cards, "Doom Ray", but Jack is protected from its effect by his "Power Giant", making Nicolas wipe out his own Life Points. Seeing this, Primo gives up on Team Catastrophe and leaves Nicolas to be damaged by his own card, but Jack saves Nicolas' life and rescues him before his Duel Runner explodes. Nicolas questions Jack's decision, to which Jack responds that Nicolas is not worth being killed, that duels are a clash of souls and that he does not deserve to duel if he resorts to dark cards in such a clash.

Due to Nicolas being unable to pass the baton to Hans, Team Catastrophe is disqualified by default.

Nicolas is last seen being questioned by Sherry as to where Team Catastrophe obtained their dark cards. 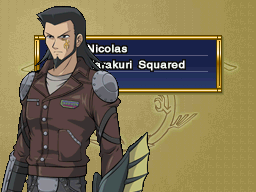 Nicolas, in Over the Nexus

Nicolas appears in Over the Nexus as part of Team Catastrophe. The player faces him immediatly after defeating Hermann. Nicolas tries to make the player crash upon his defeat, but similarly to the anime, Primo leaves him to suffer the brunt of his own cards, and Team Catastrophe is disqualified.

After finishing the game, the player can find Nicolas in the Mountain Pass and Turbo Duel against him in Single Duels or in Tag Duels where he teams up with Hermann.

Not much of Nicolas' Deck was shown, but he used two cards given to the team by Primo, "Hook the Hidden Knight" and "Doom Ray".