From Yugipedia
Jump to: navigation, search
This article is about the terrain. For the Field Spell Card, see Yami. 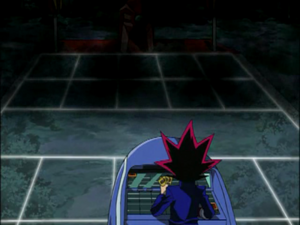 The night terrain is a type of terrain that was shown briefly in Duelist Kingdom in the Yu-Gi-Oh! anime. PaniK used it to conceal and power up his monsters.

In the anime, this terrain was created by the effect of "Castle of Dark Illusions". It provided a Field Power Bonus to DARK monsters (increasing their ATK and DEF by 30%), suppressed any Field Power Bonus other terrain would provide, and had the ability to "hide" the position and stats of monsters or other cards on the field; the opponent was unable to see what was on the other side of the field. "Swords of Revealing Light" could dispel the concealing effect of night, but not the Field Power Bonus.

In the manga, this field also made an appearance, but did not provide a Field Power Bonus. In the anime, the ATK and DEF of PaniK's monsters were adjusted so that their boosted ATK and DEF were close to their values in the manga.

The OCG/TCG equivalent of this field is "Yami".

In Yu-Gi-Oh! The Duelists of the Roses, this terrain can also be made by using the Terrain Change Leader Ability of Level 1-2 FIEND monsters, and the effect of "Cosmo Queen".