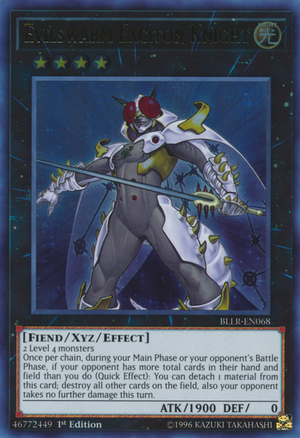 A Nuke (or "Field Clearer", etc.) is an unofficial term used to describe the action of a card effect with the power to destroy a large number of cards on the field, usually all of them, at once. For example, a card like "Dark Hole" can be used as a nuke, but if it's activated while there is only one monster on the field, then it would not be considered a nuke. Similarly, a card like "Harpies' Hunting Ground" is not considered a nuke because even though it can destroy all of the opponent's Spell/Trap cards all by itself, it only destroys them one at a time.

Usually, cards with nuke effects have extremely high costs or extremely tight restrictions in order to use their effect. For example, "Final Destiny" can destroy all cards on the field but has an extremely high cost of discarding 5 cards, and the effect of "Evilswarm Exciton Knight", which can be Summoned using any two Level 4 monsters, can only be used while your opponent has more overall cards in their hand and field, and will also give your opponent immunity from damage for the rest of the turn. However, some nuke effects have little or no cost, such as "Raigeki".

The "Gandora" archetype focuses on nuking, with all the members sharing the downside of halving the controller's LP.