Unlike the other Over-Hundred Numbers, Tachyon, along with "Number 62: Galaxy-Eyes Prime Photon Dragon" and Number 46: Dragluon, was one of the "Numbers" needed to resurrect the Numeron Dragon as described in the Legend of the Dragons of Light and Time. In the legend, Tachyon is described as the Dragon of Time. 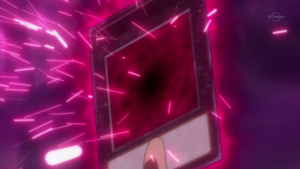 In an unknown realm, Mizar confronted Tachyon as it emerged from a cave. Mizar pulled out a blank card and started absorbing Tachyon into it. He was pushed back as the Tachyon roared and chunks of rock flew about, but he was eventually successful, Tachyon became streams of pink energy which surged into the card. He commented that this exhausted him as usual. (in the dub, Mizar thought that he would be unstoppable with this card in his Deck).

After Kite defeated Mizar in the sacred crater of the Moon where Tachyon, "Number 62: Galaxy-Eyes Prime Photon" and "Dragluon" were involved, the spirits of the three Dragons combined into a golden serpentine dragon as the number 100 flashed out. After witnessing the rebirth of this godlike dragon, Mizar and Kite both realized that "Number 100: Numeron Dragon" was the true form of their respective "Galaxy-Eyes" monsters.