It also has a Chaos form known as "Shark Drake Veiss". It is a dangerous "Number" card which merged with Reginald Kastle as a part of Vetrix's plan to take revenge on Dr. Faker. 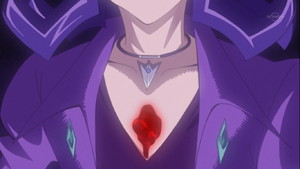 Shark infected by Number 32 (the wound is colored green in the dub).

Shark Drake once belonged to a Duelist Quattro defeated. As part of their plan to control Shark as an assassin to defeat Dr. Faker, the Vetrix Family instructed Trey to give the card to Shark.[1][2] Trey faced Shark in a Duel with the mission of forcing him to take control of "Shark Drake", which would allow the card's power to possess him. However, Shark resisted its power and Trey eventually gave him the card as a prize for winning the Duel. Despite Trey believing that he failed his mission, Shark Drake was still able to infect Shark's soul, evidenced by the small trace of darkness in his heart.[3] It started to consume Shark's soul without him realizing it, bringing him to Duel with hatred and revenge in his mind. Through Yuma Tsukumo's efforts, Shark was brought to his senses for a while.[4] 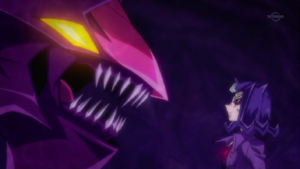 When Shark engaged Quattro in a Duel, the former was pushed into a corner, and Shark Drake continued to pressure Shark into accepting him in order to win the Duel. Driven by the wish to avenge his sister, Shark offered his soul to "Number 32" and was given a new power, "Number C32: Shark Drake Veiss", to defeat Quattro.[5] Shark believed he overcame his negative emotions with Quattro's defeat. Unfortunately, he was wrong and everything went as Vetrix expected. The next step of the plan involved Vetrix affecting Shark with his crest, effectively wiping his memory and manipulating him to take revenge on Dr. Faker.[6] 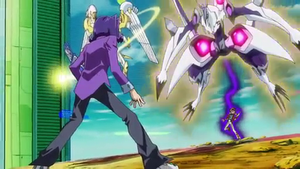 During Shark's Duel against Yuma in the semifinals, Shark Summoned its Chaos form, but Yuma took control of "Shark Drake Veiss" in order to break Vetrix's spell over Shark. The power of the "Chaos Number" was able to suppress the Emperor's Key's ability to control Numbers and begins to hurt Yuma instead. Seeing Yuma suffering, Shark remembered their friendship, regaining control over his body and mind, and worked quickly to stop the "Chaos Number" from hurting Yuma. He eventually succeeds by banishing "Shark Drake Veiss" from the field and inflicting damage to himself, causing him to lose the Duel.[7]

After the Duel, Astral obtains "Shark Drake" and later gives it back to Shark to use in the battle against Dr. Faker.[8] Having rid it of Vetrix's influence, Shark Drake had made no more attempts to possess him since then.[9]