Galaxy Queen was found by Nelson Andrews as a blank card and designed itself to look like Galaxy Queen from the TV show Nelson participates. Using its powers, the "Number" card possessed him, and made him believe it was his mother.[1]

When Nelson, still controlled by this card, Duels Yuma, Galaxy Queen controls Nelson's Duel, making him try to quickly Summon it, and even making Nelson use "Star Sparrow Forever" to make an attack from Yuma's monster targeting it become a direct attack, causing Nelson to lose the Duel. After Nelson's defeat, Galaxy Queen is absorbed by Astral.[2]

Later, while Yuma confronted Nistro and Dextra during the WDC, Number 96 appeared within Emperor's Key to confront Astral. Astral asked if he broke the seal, and Number 96 responded saying that's what the "Numbers", including "Galaxy Queen", wanted to begin with. Astral questioned why the other "Numbers" gave their strength to Number 96, who responded once more that it's what they wanted. It's what all "Numbers" want - the world's destruction.[3]

The card was shaped after the Galaxy Queen character from The Sparrow's TV show, whose role is played by his mother. 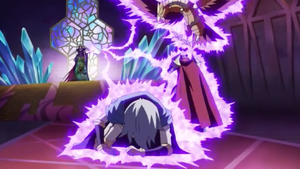 Galaxy Queen overpowers the heroes in the TV show.

She first appears as a character in a brief part of an episode of the show which Astral watched. She was shown overpowering Beast-Warrior Puma and Phoenix Beast Gairuda with her evil powers. At that moment, The Sparrow appears and confronts her, who asks him how he dares defy their master, the king of darkness Dead Max, and tells him he's got guts. The Sparrow says that his justice has no limits, and attacks her. However, at that moment, he sees Galaxy Queen's reflection in some crystals, which reveals her real form - the one who The Sparrow always searched - his mother. Because of that, he hesitates, and Galaxy Queen declares that Dead Max's curse will fall upon him, as she shoots him with her powers as well. By that way, she says that the three of them will now follow her orders, and laughs, while the three of them suffer. The episode then ends.[1] 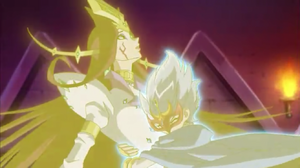 Later, a scene of the next episode is shown. The Sparrow advances towards Galaxy Queen, with her powers not being able to stop him, and he jumps towards her, hugging her. Galaxy Queen drops her rod as The Sparrow's hug makes her return to normal, and she calls his name. The Sparrow then cries.[2]

Nelson's card, "Furious Max's Curse", hints that The Sparrow's mother was under the curse of Dead Max, which made her become evil.