From Yugipedia
Jump to: navigation, search
For other versions of this character, see Number 96 (disambiguation).

Number 96, known as Numbers 96 in the Japanese version, is a character version of the card "Number 96: Dark Mist" and a recurring antagonist in the Yu-Gi-Oh! ZEXAL anime. 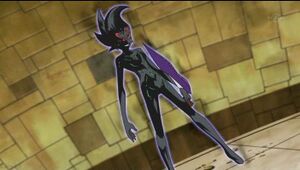 Number 96, when not in its card form, appears similar to Astral, but with a jet black body, instead of light blue. Unlike Astral, whose right eye has a white sclera, Number 96 has a black sclera, but a gold iris on his left eye, like Astral. However, the markings where Number 96's eyebrows would be are longer, the top ends stretching into his forehead and becoming crooked (resembling horns of some sort) and the bottom ends having a spike on each that line his nose. These marks are red instead of his other green marks. He is capable of forming a ghostly tail and having "tentacles" that stretch out from his body.

As with Astral, the dub version has Number 96's lower body sometimes blurred off to remove any nudity implications. Lastly and likewise, Number 96's D-Pad is the same one Astral uses except it is purple instead of blue.[2] 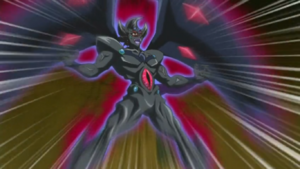 When Number 96 used "Rank-Up-Magic Barian's Force" on his card form, his own physical appearance significantly changed. He gained a Barian Emblem on his forehead, an eye on his abdomen much like Don Thousand and a pair of wings with red jewels. His muscle mass grew considerably and also became more pronounced. His hair gained volume, his right eye is no longer black, and his voice deepened significantly, but only for one episode.[3]

Unlike its counterparts, Number 96 is a malicious entity who desires the power of the other "Numbers" so that he may become the most powerful of them all. He is cunning enough to allow itself to be absorbed by Astral so that he may possess him from the inside and steal his "Numbers". Number 96 also enjoys sadistically manipulating his hosts and brutally defeating his enemies. While working with Vector, Number 96 comments that Vector resembles "a second rate villain" due to his usage of tricks to manipulate Duels.[3]

Number 96 considers his card form to be his "other self". He also considers himself to be the "darkness" to Astral's "light". To that end, he also, constantly tells Astral that he needs his power to win and will someday become evil.[4] After having obtained the power of Chaos, he develops a God complex and sets his sights on destroying all three parallel worlds in a fit to testing his newfound power and attaining his goal of crushing Astral and Yuma together.[5]

According to Don Thousand, Number 96 was actually a fragment of his own power, that was embedded in Astral's body when he fought against him eons ago. This made Vector finally understand why an individual like Number 96 was inside Astral.[6]

Number 96 is shown to be an extremely powerful "Number" card, having escaped the Emperor's Key a total of three times. He is able to possess people like regular "Numbers" and have full control of them. He is also capable of possessing Astral, but only when the Emperor's Key has been removed.[1] Unlike other Numbers, he can also manifest and even Duel opponents without a host.[2]

After Ranking Up with Barian power, he effectively became immune to being re-absorbed by Astral.[3] His powers were intensely magnified later upon gaining control over his newfound power of Chaos. He can open portals and launch extremely powerful energy balls much like the Barians, as seen when he attacked the Astral World and the Barian World. He can even create a Sphere Field without the aid of a Barian Sphere Cube.[5]

During the battle between Astral and Don Thousand, a fragment of Thousand's soul was trapped inside Astral. It eventually developed into the form of Number 96.[6] 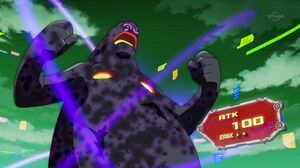 The fake form of Number 96.

After the "Numbers" were released, Number 96 came into the possession of an unnamed man. Under his control, Number 96 appeared as a black, blob-like creature. After the man was defeated by Yuma Tsukumo, Astral absorbed the "Number". The man did not use the effects of this "Number", as the "Number" himself wished to be passed on to Yuma.[1]

When Bronk Stone knocked the Emperor's Key from Yuma's neck, it could no longer contain the power of the malevolent "Number". He appeared before them as a blackened version of Astral and imprisoned the original version, who told Yuma to entrust Bronk with "Number 39: Utopia". At this point, Number 96's appearance in the Duel shifted from its blob-form to a more humanoid one with claws, fangs, and a skull-like torso.[1] 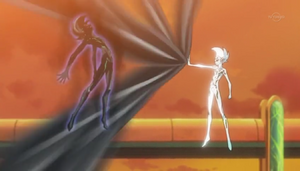 Number 96 then manipulated Yuma as a puppet in order to Duel Bronk, using Yuma's cards to Summon his own. He was capable of manipulating Yuma's actions, but not his words. In this way, Yuma tricked Number 96 into destroying Bronk's Set "Gearspring Exploder". That allowed Bronk to use "Utopia" with the effects of his "Gearspring" Spell Cards and defeat "Dark Mist". Bronk then threw the Emperor's Key back to Yuma and Astral is freed, allowing him to absorb Number 96 once again.[1] 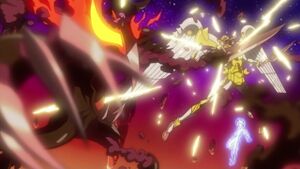 While Yuma confronted Dextra and Nistro during the WDC, Number 96 appeared within Emperor's Key to confront Astral. Astral asked if he broke the seal, and Number 96 responded that that's what the "Numbers" wanted to begin with. Astral questioned why the other "Numbers" gave their strength to Number 96, who responded once more that it's what they wanted. It's what all "Numbers" want - the world's destruction. He claimed that Astral also wanted the same. Astral denied it, but Number 96 pointed out his very presence as proof against that. He told Astral to remember his mission and join the "Numbers". He assaulted Astral, who was defended by Utopia. Number 96 asked if Utopia meant to stand against them and concluded he'll just start by absorbing him first. He continued his assault via the use of his own card.[7] After Astral sent "Utopia" off, Number 96 captured and began to infect him. His plan failed as a light helps Astral break free, at the same time Number 96 disappeared.[8] 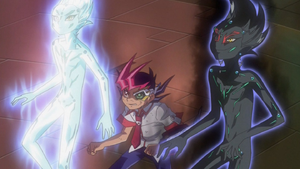 Number 96 appeared once more when Astral was recovering inside the Emperor's Key from the effects of the Barian Sphere Cube. Number 96 told him that he could not win against the Barians without accepting his evil side. Later, he appeared before Yuma and Astral, insisting that they cannot win against the Shadow Giant without his power. When the two are about to lose, he convinced Astral to unseal him, as Yuma could be hurt if they lose. Number 96 assisted them as Yuma Summoned "Number 96: Dark Mist" to win the Duel and then vanished. After briefly appearing out of the Emperor's Key, Number 96 told Astral that there will be events in the future that will require him to become evil, before vanishing again.[4] 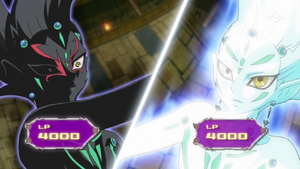 After escaping the Emperor's Key, Number 96 traveled to South America, where he took possession of a wealthy politician named Parker. He was eventually approached by Vector, who urged him to reveal his true form. Vector offered to be Number 96's servant, introducing himself as one of the Seven Barian Emperors. Number 96 found this amusing and Vector insisted that he simply wanted to be at the right hand of the true king. Vector told him the location of a Mythyrian "Number" and gave him "Rank-Up-Magic Barian's Force" as proof of loyalty. Number 96 left Parker's body behind and journeyed with Vector to the ruins where the Number was located. He defeated the guardian, Battle Ox, and obtained the card. They then set a trap for Yuma and Astral after Vector detected their incoming. Separating the two, Astral was forced to Duel Number 96 on his own, with Number 96 hoping to win control over Astral's body. Number 96 revealed that whenever he is attacked, the temple's traps activate on Yuma, each having the potential to kill him. Using "Malicevorous" monsters, Number 96 brought out his own card and proceeded to use "Small Stopper" to prevent Astral from playing defensively, which Astral got around with "Number 39: Utopia" and "Exchange Guard Robe". Vector activated one of the ruins' traps, a huge pendulum blade on Yuma's platform.[2] 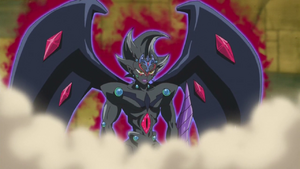 Number 96 Summoned his new Mythyrian "Number", "Number 65: Djinn Buster". Between it and "Number 96", Astral was quickly reduced to 600 Life Points, as he refused to use "Exchange Guard Robe" again for fear of Yuma's life. Astral attempted to defend with "Swordsman of Revealing Light", but Number 96 used his new "Rank-Up" card to Summon "Number C65: King Overfiend", which, together with "Dark Mist" destroyed the "Swordsman". Astral narrowly hung on by reviving "Utopia" with "Xyz Reborn" and used "Superior Overlay" to destroy "Overfiend". "Number C39: Utopia Ray" was Summoned, which almost destroyed "Dark Mist", but Number 96 used "Chaos Return" to activate "Barian's Force" again, Summoning "Number C96: Dark Storm, whose effect ended the Duel in a DRAW. Vector pulled a chain to initiate a self-destruct system in the ruins while he and Number 96 fled. While traveling through dimensions, Number 96 left Vector and told his "underling" to find him if he has another plan.[3] 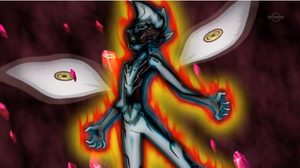 After this, Number 96 worked to master the power of Chaos that he had obtained, determined to use it to defeat Yuma and Astral. Having tamed the power, he believed he had surpassed Astral and determined that he was a "god" now. He launched an assault, which affected Earth and both the Barian and Astral Worlds as he wished to destroy everything. He pulled Yuma, Astral, Shark, Kite and Tori to his location and began a Duel with Yuma and Astral, generating a Barian Sphere Field without the use of a Barian Sphere Cube, which caused damage to Yuma. Using the "Chaos Field", he stole "Number 69: Heraldry Crest" and "Number 92: Heart-eartH Dragon" from Yuma's Extra Deck and Ranked them up.[5] Despite the advantage of his Field Spell Card, Number 96 was eventually defeated by the duo through the power of ZEXAL II. After the Duel, he attempted to take Astral's body for his own anyway (causing the latter to revert to the darker color scheme he'd had when influenced by the power of Chaos). However, Astral sacrificed his energy to seal Number 96 with an explosion, draining him enough that he was forced to return to the Astral World.[9]

With his defeat, he was sealed in a ball of light, his power returning to its origin - Don Thousand. He and Vector would put the power he retrieved from Number 96 to use by producing fake "Numbers".[6] This also resulted in Vector obtaining his card form[10] and the Mythyrian "Number" he had.[11]

Number 96 initially plays Yuma's Syllable Deck while manipulating him. He uses it differently, in that he puts all his effort into the Summoning and use of his own card.

After his re-emergence, Number 96 uses a "Malicevorous"/"Chaos" Deck, featuring DARK monsters based on dining implements. It is again centered on Summoning his own card, augmented with his Mythyrian "Number" and the inclusion of "Rank-Up-Magic Barian's Force", "Chaos Field" and "Number C" monsters.