"Number C", short for "Chaos Number" ( Kaosu Nanbāzu, "Chaos Numbers"), is a sub-archetype to both the "C", "Chaos" and "Number" archetypes. They are evolved forms of the base "Number", which are Summoned by overlaying their base counterpart through Chaos Xyz Evolution. They are used by Yuma Tsukumo, Reginald Kastle/Nash, Mizar, Girag, Alito, Vector, Number 96, Quattro, Rio Kastle/Marin, Dumon, Trey, Quinton and Don Thousand in the Yu-Gi-Oh! ZEXAL anime and Yu-Gi-Oh! D Team ZEXAL manga. They are supported by the "Rank-Up-Magic" archetype and "Chaos Field".

So far, all "Chaos Number" monsters, if they are Summoned normally rather than by Chaos Xyz Evolution, require one more material than their normal versions. The first two "Chaos Numbers" require the same Attribute as the Attribute of their base form and necessitate the user having 1000 or fewer Life Points in order to activate their effects. The rest require a "Rank-Up-Magic" Spell Card, or in rare cases, another card capable of performing a Rank-Up such as "Don Thousand's Throne". Furthermore, with the exception of "Number C39: Utopia Ray Victory", all "Chaos Numbers" Summoned through Rank-Up have glowing Barian energy lines running through their bodies.

When Summoned without the use of a "Rank-Up-Magic" card, they have the same ATK and DEF as their non-Chaos counterparts. When one is Summoned, the "Number" reverts to its neutral form and enters the Overlay Network. The Overlay Network then explodes, revealing the new neutral form, which then unfolds into the "Chaos Number". 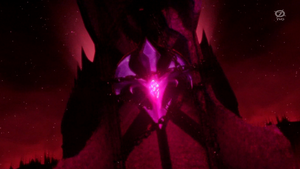 The sealed Barian Gate from which the "Number C" monsters are Summoned through Rank-Up.

In Yu-Gi-Oh! ZEXAL II, Barians Summon "Chaos Numbers" through the use of "Rank-Up-Magic" cards. As implied, the "Chaos Number" Summoned this way is 1 Rank higher than its original form. Also, unlike their non-Barian counterparts, these "Chaos Numbers" have increased ATK and DEF. "Chaos Numbers" Summoned this way have a blood-red aura surrounding them, slightly resembling electricity and glowing Barian energy lines surrounding their bodies. When someone Summons a "Chaos Number" by Ranking-Up, they enter a contract with it in order to maintain control of it, at the risk of depleting their life, such as with Girag when he Summoned his "Number C106: Giant Red Hand". It can also put the user at risk in case the "Chaos Number" is destroyed, which can leave them severely injured, even on the brink of death. If a "Chaos Number" monster is Summoned via a "Rank-Up-Magic" card (except "Numeron Force", "Astral Force" and "Argent Chaos Force"), "Chaos Field" or "Don Thousand's Throne", their Overlay Units take the form of red diamond-shaped crystals as opposed to glowing orbs, and are referred to as "Chaos Overlay Units", just as with the "CXyz" monsters. The sealed "Barian Gate" appears while doing so.

Although all "Number C" monsters Summoned through Rank-Up are 1 Rank higher than their original form, according to the first preview of episode 123 that was posted on TV Tokyo's website, in the final Duel with Nash, Yuma would have Summoned "Number C39: Utopia Ray Neo", which would have been the only "Number C" that is 2 Rank higher than its base form. It's implied that "Rank-Up-Magic Astral Force" would have been used in this occasion to Double Rank-Up "Utopia". However, this plot was eventually scrapped and, later on, the concept for this monster was re-used when Yuma Summoned "Number 39: Utopia Beyond", which is anyway 2 Rank higher than its base form, but is not a "Number C" monster.

In addition to the 28 known "Number C" monsters, the never seen "Number C39: Utopia Ray Neo" was mentioned in a preview for Yu-Gi-Oh! ZEXAL episodes, but it ultimately never appeared in the anime, with its original concept recycled as "Number 39: Utopia Beyond".

While "Chaos Numbers" are generally Summoned by performing Chaos Xyz Evolution on a 'regular' (non-Chaos) "Number", there was a single instance where Don Thousand performed a form of Chaos Xyz Evolution on a monster that was already a "Chaos Number", Summoning what he called a "Chaos Imaginary Number", referencing the mathematical concept of imaginary numbers. Due to this card's name ( Kaosu Imajinarī Nanbāzu, "Chaos Imaginary Numbers"), it is not a true member of the "Number C" ( Kaosu Nanbāzu, "Chaos Numbers") archetype.