The Numeron Code (ヌメロンコード, Numeron Kōdo) is a powerful card which created all of reality in the Yu-Gi-Oh! ZEXAL anime. It has records of everything in the universe and has the power to decide the fate of all reality.

The Code was created as the result of a tear shed by the dragon that created the universe impacting with Earth. This also created the moon, where the key to the Code ended up. The correlation between these events was inscribed on a tablet.[1]

Finding the Code is the primary objective of both the Barian World[1] and Astral World.[2] Each aims to find the Code in order to destroy the other. Astral knew where the Code was prior to going to Earth, but upon arriving his memories were scattered in the form of the "Numbers". Since gathering all of the "Numbers" would reveal the location of the Code within Astral's memories, both him and the Barians plan to collect the "Numbers" before the other side do.

Seven specific "Numbers" hidden within ruins can aide in finding the Code without obtaining all of the "Numbers".[3][2] In addition, the tablet details that the two "Galaxy-Eyes" dragons must meet on the Moon and battle. The victor will be awarded the key to the Code.[1] 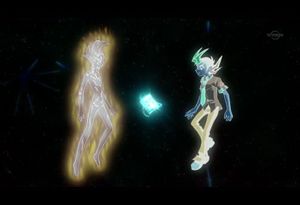 After Yuma Tsukumo and Astral's Duel with Shadow Giant where The Door allowed Yuma Tsukumo and Astral to access more of Astral's memories, they learned that Astral's original mission was to find the Numeron Code - the "God Card" that created the world and can decide fate. He must find it before the Barians do. He also learned that the location of the code was hidden in the memories of the 7 Mythyrian "Numbers" he has yet to collect. Astral intends to use it in order to find the locations of uncollected "Number" cards.[4]

The Code is shown to be a card that swirls around into different forms in Astral's memories. Inside it is how the world developed and where it is heading to. The "Numeron" archetype is related to the Code and emulates its powers.[5][2][6]

Once Astral obtained all of the "Numbers" he quickly found the Numeron Code intending to fulfill his mission of destroying the Barian World, but Yuma protested against Astral using it for more destruction. Astral challenged Yuma to a final Duel to resolve problem of how the Code will be utilized.[7]

After his last Duel with Yuma, Astral finally obtained access to the Numeron Code and used its powers to revive Kite Tenjo, the Seven Barian Emperors (they were returned back into their true human forms), Ponta and Eliphas in order to restore peace to the universe.[8] According to Eliphas, Astral fused the Barian World and the Astral World using the reality warping artifact. This also allowed Chaos to return, causing upcoming challenges to take place.[8]

The truth began far back in the past. Inside the darkness where nothing existed, first one card was born. The front and back were determined, and the world began.

— Nightshroud on the origin of the universe