Obelisk Blue (オベリスク・ブルー Oberisuku Burū) is the highest of the three dormitories at Duel Academy. The reason for its superiority over the other two dorms goes back to the fact Seto Kaiba is the owner of this school, and that he owned "Obelisk the Tormentor" during Battle City.

The dorm is mostly made up of students who have connections and are rich. Luxurious interior design, high-quality rooming, and finer food are offered to the students who reside here. In order to start in Obelisk Blue, upon enrollment, not only does one needs to have high grades in the written examination, but they also need to have earned a diploma from another Duelist prep school. 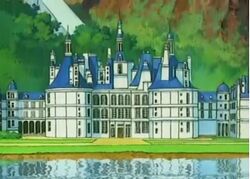 The dormitories are divided into separate sections based on gender. Dr. Crowler is in charge of the male dorms, while Fonda Fontaine is in charge of the female dorms. All female students that are accepted into Duel Academy are automatically placed in the Obelisk Blue dorms regardless of whether they have the skill necessary to have been accepted into dorm. The reason for this is because the other two dorms do not have the appropriate housing, as Obelisk Blue is the only one with separate dormitories for both female and male students.

A navigational map of Duel Academy in Yu-Gi-Oh! GX Duel Academy. Click on a dot to go to a location's page. 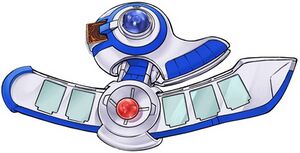 The Obelisk Blue students are identified usually by blue long-tailed jackets with white trimmings, unlike the Ra Yellow and Slifer Red students, whose uniform jackets are shorter in length. However, there are variations on this jacket, as seen by Vellian Crowler, Atticus Rhodes, Zane and Syrus Truesdale's outfits. The most common variant are white jackets with blue trimmings (basically an inverted version of the standard male uniform). This version is supposed to be worn by second-years or higher (seeing as Chazz Princeton didn't wear one, and, after all, he was a top-ranked student) Obelisk Blue students, like Atticus Rhodes or Zane Truesdale. In addition, in the beginning of GX, another variant was seen for Obelisk blue males. In episode 4, there were also Obelisk Males with short jackets that looked similar to blue Slifer Jackets, and long Jackets.

For females, the typical Obelisk Blue attire consists of a white top with blue trimming, a blue miniskirt, and royal blue boots. However, a few students wear different outfits with their Obelisk vests (e.g. Missy).

All four of the Overseas Champions were allowed to stay in this dorm, even though they were not officially enrolled.