Officer 227, known as Duel Chaser 227 in the Japanese version, is a character in the Yu-Gi-Oh! ARC-V anime. He used to work for Sector Security in the Synchro Dimension, but he was demoted and fired for his failure to apprehend Yugo for trespassing in the Topsiders area of New Domino City.[3] 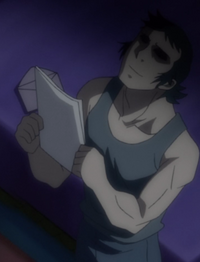 227 without his helmet or sunglasses.

Officer 227 wears the standard Sector Security uniform for Duel Chasers and a pair of dark sunglasses.

A recurring theme is that his full face is never shown while he isn't wearing his helmet and sunglasses. The sole time he had them off, his face was shaded. This is best noticed when he is stripped of his uniform in the Underground Labor Facility but is still wearing the helmet and sunglasses. This gag extends even to the fourth ending theme, Speaking, where 227 is featured lying in the grass with his helmet off and the top part of his head cut off by the screen.

Officer 227 is confident in his skills, claiming he has a 100% arrest rate and that he wouldn't let Yugo get past him.[4] This self-confidence was shown to turn into overconfidence when he thought he could defeat Yugo with a final direct attack, ignoring Jean Michel Roget's warning about Yugo's Set card, resulting in his loss. Even after his repeated losses, he still believed himself to be a superior Duelist to the Commons prisoners in the Underground Labor Facility purely due to having been a Topsider.

He, like many Synchro Dimension residents, is heavily competitive on the social scale. After being demoted to the Commons, 227 was shown to have become desperate to regain his former privileges, praising Roget like a savior for the "second chance" of being allowed to enter the Friendship Cup, despite Roget being the one who demoted him in the first place.

The code name 227 is a reference to the 227 rules for fully ordained monks in Theravada Buddhism.

When Yugo and Zuzu Boyle trespassed in New Domino City's Topsiders area and fled, Officer 227 was sent after him, forcing him into a Turbo Duel.[3] Yugo won the first corner and took the first turn. The Duel was then broadcast from a helicopter to various places around New Domino City, including the homes of the Topsiders, with Melissa Trail commentating. 227 and Yugo exchanged blows with their Synchro Monsters. 227 took each of Yugo's "Hi-Speedroid" monsters by Synchro Summoning "Goyo" Synchro Monsters on each of his turns, prompting Yugo to question the morality of that playing style.[4] Throughout the Duel, Jean Michel Roget would translate the Duel into a chess game from his office. When 227 thought he was about to finish Yugo off, Roget warned him not to attack, but he didn't listen, allowing Yugo to win the Duel by using "Dice Roll Battle" to Summon his "Clear Wing Synchro Dragon", which defeated 227 and stopped his Duel Runner. After he was defeated, Roget stated that he was done with 227.[4]

227 was fired and demoted down to the Commons as a result of this loss, even being arrested by his former colleagues. Shortly thereafter, however, he was entered into the Friendship Cup. He didn't Duel during the Cup's first day, but that night, Sam delivered a letter from Roget to the Duel Chaser's suite. Roget offered to restore him to his former position if he defeated Yuya Sakaki. The letter also contained a Fusion Monster, "Goyo Emperor".[1]

He Dueled Yuya in the first Duel of the second day of the Friendship Cup the following day, addressed as a Duel Chaser and wearing his uniform again. Yuya attempted to alert the crowd about the fate of the losers of the Cup, but was met with mockery and ignorance. 227 told Yuya to either Duel or surrender, albeit not unkindly. He traded blows with Yuya equally using "Goyo Predator", but when Yuya hesitated before he could launch a game winning attack, 227 was able to defend himself with an Action Card. He proceeded to Fusion Summon "Goyo Emperor" on his next turn, and pushed Yuya into a corner. Yuya came back on the next turn with "Odd-Eyes Saber Dragon", destroying "Goyo Emperor" and reclaiming control of his monsters, then brutally defeating 227 with "Odd-Eyes Pendulum Dragon". The attack knocked 227 from his Duel Runner, badly injuring him. He was loaded onto a stretcher as Yuya tried to prevent the authorities from taking him to the Underground Labor Facility.[2]

In the Labor Facility, 227 still believed his status as a former Topsider would grant him some degree of comfort, but he was disavowed of this notion by Lucas Swank, the man in charge of the Labor Facility. 227 attempted to earn his freedom from the Labor Facility by winning consecutive Duels against Lucas's criminals, believing that it would be easy given his status as a Topsider, but he was eventually defeated, leaving him begging for another chance. Gong Strong and Chojiro Tokumatsu tried to defend him, but Lucas's criminals carted 227 away.[5]

227 and a number of other former Sector Security officers participated in a rebellion within the Underground Labor Facility, with he and his fellow former officers attacking Lucas.[6] These same officers successfully escaped the Labor Facility as part of the Commons revolt, having captured Lucas in the process. They commandeered new Duel Runners and arrived in time to see the end of the second Turbo Duel between Yuya and Jack Atlas. 227 was excited to see that the boy who had defeated him had gone on to Duel the King and told the other officers they'd follow the Duel on an adjacent highway.[7]

Officer 227 uses a Deck centered on "Goyo" Synchro Monsters, to take control of the opponent's monsters after destroying them by battle, likely a homage to the Sector Security officer Tetsu Trudge, who is known for his use of "Goyo Guardian".

Before his Duel with Yuya, Jean Michel Roget sends him the "Goyo Emperor" Fusion Monster, making him the first known Synchro Dimension resident to perform an Extra Deck Summoning technique other than Synchro Summoning.