Ohza Akaboshi ( Akaboshi Ōza) is a character in the Yu-Gi-Oh! OCG Structures manga. Nicknamed the "Perfect Champion", he's an old comrade of the Four Duel Kings'. According to Jukyu Goriki, he won the World Championship in the elementary school category in the year prior to his manga debut. 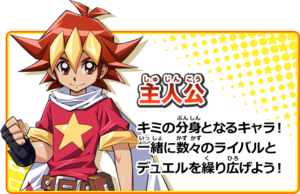 Ohza is designed after the protagonist of the Yu-Gi-Oh! Duel Monsters Saikyo Card Battle game. In the manga, when he's Dueling, Ohza activates "Duel Mode", covering part of his face with his scarf. When he does, he becomes fully analytical, and, as his comrades say, he has "zero feelings" - in contrast to his usual cheerful personality.

In flashbacks, he was shown using "Gem-Knight" monsters in the past.