From Yugipedia
(Redirected from Ojamachine Black)
Jump to: navigation, search

This page lists cards that have been mentioned, but have not been shown in any Yu-Gi-Oh! media. This most often happens when a card is mentioned by a character or listed in the effect of another card.

In the manga and anime, cards may be used without showing the physical card itself being seen; for example, monsters are often Summoned without its corresponding Monster Card being seen. Such cases are not considered to be within the scope of this page.

During an explanation of the Types of Magic Users in Duel Monsters, "Dark Knight" and "White Knight" were listed as examples of Black Magic and White Magic respectively.[1]

"Zombie" was a card used by Katsuya Jonouchi in the manga, which was defeated by Yugi Mutou's "Blackland Fire Dragon", causing Jonouchi to take 500 damage.

However, it is seen in the Toei anime.

When Mai was reciting the cards Ryuzaki drew from the top of her Deck without looking, one of them was called "Blonde Wave" (ブロンドウェーブ, Burondo Wēbu).[2]

"Ultimate Perfect Great Moth" was the final form of "Larvae Moth". Insector Haga planned on using it against Dark Yugi, but it prematurely emerged as "Great Moth".

The card has been released in other media, where its English name is "Perfectly Ultimate Great Moth".

This token is listed in the lore of "Nine-Tailed Fox", but it was not Summoned.

These Tokens are still Summoned by "Nine-Tailed Fox" in the OCG, although no Token Cards have been printed for them. In video games (such as Yu-Gi-Oh! Duel Links), they use the same artwork as "Nine-Tailed Fox".

These two monsters were Summoned, then immediately Tributed by Thunder Spark for the effect of "Spirit Converter". They never appear in the frame.[4]

Fusion of "Eye of Timaeus" and "Poison Butterfly"[edit]

Yami Yugi attempted to fuse "Eye of Timaeus" and "Poison Butterfly", but it did not work, because Yami Yugi had lost Timaeus's trust by playing "The Seal of Orichalcos".[5]

"Mystic Baby Knight" and "Mystic Baby Magician" are mentioned in the card text of "Mystic Revolution" as monsters that can be Tributed for its cost.[7]

The card text of "Mystic Revolution" implies the existence of "adult forms" of "Mystic Baby Knight" and "Mystic Baby Magician". These monsters are both unseen and unnamed.[8]

"Alice in Despairland" only appears in the copyright section at the end of the Yu-Gi-Oh! GX - Episode 079 (after the "Next Episode" preview). The scene shows Bastion Misawa in his room researching information about Alice. When he finds the profile of this mysterious card, he is attacked by the spirit of this card.[9] However, the scene was not included in Episode 80, and the card itself was never seen in the episode.[10]

"Sinister Doctrine - Doubt" is a Quick-Play Spell Card that has the same effect as the other "Sinister Doctrine" cards. It was supposed to be the final part of completing "Super Polymerization", but was not played, because Syrus escaped from Brron's minions.[12]

The Fusion Monster "Super Fusion God" is mentioned as a monster Yubel intended to Summon to unite the twelve Duel Spirit Dimensions into one. Yubel used "Super Polymerization" and "Chain Material" to fuse one monster of each Level from 1 to 12 to Summon this monster, but Jaden chained "Spiritual Fusion", fusing the souls of Yubel and himself instead.[13]

The Delta Accel Synchro Monster "Cosmic Blazar Dragon" is mentioned in a profile about Yusei Fudo as being his ultimate ace monster, in the original future in which Z-one did not interfere.[14] This card was later officially released in the TCG/OCG.

The Monster Card "Deep Anglerfish" is mentioned on the visual screen of the Augmented Reality Duel. It is a WATER Fish-Type Effect Monster that is Level 6 and has 2200 ATK and 1400 DEF. Its effect is: When this card is destroyed by battle and sent to the Graveyard, send 1 Fish-Type Monster from your Deck to the Graveyard. Then, you can Special Summon 2 "Deep Anglerfish Jr." from your Deck.[15]

The Monster Card "Pink Peach Dragon" is mentioned on the visual screen of the Augmented Reality Duel. It is a Dragon-Type Effect Monster that is Level 2 and has 200 ATK and 100 DEF.[15] 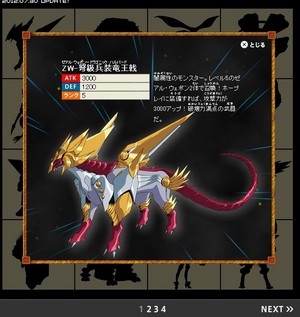 According to TV Tokyo, it is a DARK Rank 5 Xyz Monster with 3000 ATK and 1200 DEF. TV Tokyo states that it can be Summoned by using 2 Level 5 "ZW -" monsters. If it is equipped to " Utopia Ray", that monster gains 3000 ATK. It is described as the "weapon of the ultimate destructive force".

On July 31, 2012, its name on TV Tokyo's website was changed to "ZW - Leo Arms", although its appearance remained unchanged. When it debuted in Yu-Gi-Oh! ZEXAL episode 067: "Sphere of Fear: Part 3" on August 13, 2012, it used that name and appearance. In contrast to the original TV Tokyo description, the monster that appeared in the anime was LIGHT-Attribute, not DARK.

In January 2021, a card named "ZW - Dragonic Halberd" was released in the OCG in the set Lightning Overdrive. While its appearance is inspired by "ZW - Leo Arms" (i.e. the design originally associated with the name "ZW - Dragonic Halberd"), its design is clearly distinct. It has the same stats as the monster described on TV Tokyo, including being DARK (in contrast to the LIGHT-Attribute "ZW - Leo Arms"). Like the card originally described on TV Tokyo's website, it can be equipped to "Number C39: Utopia Ray" (or any "Utopia" monster) to increase its ATK by 3000.

In Yu-Gi-Oh! ZEXAL episode 104: "Barian Vengeance: Part 2", Alito used the effect of "Battlin' Boxer Cheat Commissioner" to activate "Rank-Up-Magic Barian's Force" from Nistro's hand, which would have upgraded his "Number 54: Lion Heart" into a "Number C" monster via Chaos Xyz Evolution. However, Yuma activated "Overlay Marker", negating the effect of "Cheat Commissioner" and thus preventing "Number C54" from even being created.

The Xyz Monster "Number C39: Utopia Ray Neo" was mentioned on NAS's official site in the original Japanese title of Yu-Gi-Oh! ZEXAL episode 123: "Assimilation, Part 2" that was listed in a preview for the episode. That title was "Double Rank-Up! The Transcendent Evolution: "King of Wishes, Hope Ray Neo!!"" (ダブル・ランクアップ！超絶進化「希望皇ホープレイ・ネオ」！！), but was changed before the episode's release. According to the title, it would have been Summoned via Double Rank-Up, meaning it would have been Rank 6, two Ranks higher than "Number 39: Utopia".

The card "The Closed Eight" was mentioned on NAS's official site in preview for Yu-Gi-Oh! ZEXAL episode 131: "Power Play". A character named Alco would have given the card to Kite, who would have attempted to pass the card to Yuma. Ultimately, neither Alco nor this card ever appeared.

The text of "Chimera Hydradrive Dragrid" implies it is possible to Summon all 6 head-modes, based on an Ignis and the corresponding Attribute. However, Bohman was able to successfully create only "Chimera Hydradrive Draghead - Aqua" and "Flame". The third time he tried to activate Master Storm Access, the process failed and the monster was not created, due to the Neuron Link being stopped by Akira Zaizen and Ghost Gal.

In Yu-Gi-Oh! Duel Links, Sartorius Kumar has voice lines for Arcana Force monsters based on every Major Arcana Tarot card, including "Arcana Force" monsters that have never appeared in any media.

Specifically, the cards that have never appeared in any media, but have voice lines in Duel Links, are the following:

This card was stated by Kevin Tewart to be the best card in the game, and that only he possesses it. He has also stated that like the Upper Deck Entertainment "The Seal of Orichalcos", it is not permitted in official tournaments.[16][17]