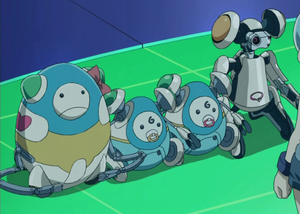 Lillybot and Orbital 7 with their children

Orbital 7's children are two smaller robots who are similar in appearance to Lillybot. They appear in the final episode of Yu-Gi-Oh! ZEXAL.[1]

The two robots are small and short, showing a somewhat similar appearances to Lillybot, who is their "mother". Their attire sports a baby pajama look-alike outfit. They appear to have pacifiers in their mouths. It is unknown who built them.