PaniK's monsters are a group of Fiend monsters used by PaniK. Unlike the majority of monsters, these have ATK and DEF values which are not multiples of 100, or even of 50 in most cases.

They were used by PaniK in his Duel against Yami Yugi, which took place in night terrain.

In the Yu-Gi-Oh! manga, their stats were multiples of 100. The night terrain concealed PaniK's monsters, but did not affect their ATK or DEF.

In the video game Yu-Gi-Oh! Duel Monsters, the Field Spell Card "Yami" boosts their ATK and DEF by 30%. To preserve the stats they had in the manga, the original ATK and DEF of these monsters (except "Reaper of the Cards") were modified so that after the boost by "Yami", their ATK and DEF would approximate the values they had in the manga; then, unlike other monsters in the game, the stats of these monsters were rounded to the nearest 100 after receiving the boost from "Yami".

In the anime, the night terrain boosts the ATK and DEF of these monsters by 30%. The same values as the video game Yu-Gi-Oh! Duel Monsters were used, but unlike that game, their ATK and DEF were not rounded off.

In the OCG and TCG, the cards were released with the same stats as the video game and anime, despite "Yami" giving a fixed 200-point increase rather than 30%. 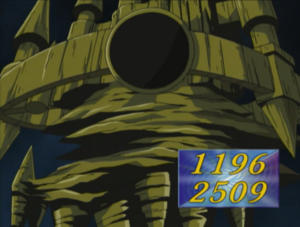 The stats of "Reaper of the Cards" may have been chosen so that the digits in the ATK and DEF become 1-3-8-0-1-9-3-0, which, when read variably according to goroawase pronunciations, can be interpreted as himitsu yama, ikusare (秘密山、行くされ), similar to "go to the secret mountain", a possible reference to gods of death in Japanese folklore.