From Yugipedia
Jump to: navigation, search
For other uses, see Paradox (disambiguation).

Paradox is the main antagonist in Yu-Gi-Oh! 3D Bonds Beyond Time who is able to travel through time and space to change his destroyed future by Dueling Yugi Muto, Jaden Yuki and Yusei Fudo.

He was one of mankind's last four survivors in an apocalyptic future, along with Z-one, Aporia and Antinomy. Unlike his fellow survivors, not much of his backstory prior to meeting the other survivors is shown.

His name is derived from the concept of "paradox" in the theory of time. According to it, a paradox is created if the past is altered which then changes the future entirely. This references his mission of changing history by destroying the game of Duel Monsters to prevent his own terrible future from happening, which would have caused catastrophic and drastic changes to the future had he succeeded. 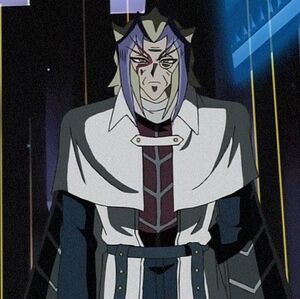 Paradox in the ruined future in Yu-Gi-Oh! 5D's

The death of the original Paradox

Paradox was one of the survivors of the "Meklord Emperor" genocide along with Z-one and Antinomy, who eventually discover a fourth survivor, Aporia. Together, the four of them had conducted many experiments in order to prevent the genocide, succeeding in granting Z-one eternal life thanks to a life support system they created. However, Paradox alongside Antinomy and Aporia eventually died from natural causes and were placed in capsules, leaving Z-one the only survivor.[2] 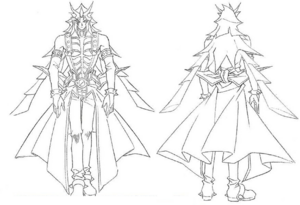 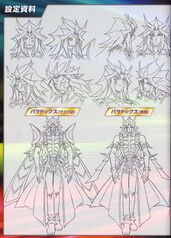 A robotic copy of Paradox's younger self was created by Z-one, and programmed with his original self's hatred of Duel Monsters for bringing about the end of the world. Paradox was charged with killing the game's creator, Maximillion Pegasus, and given a Duel Runner capable of traveling into the past to assassinate him. If Pegasus was killed before recreating the Shadow Games as Duel Monsters, this would effectively rewrite the future; thus the Meklord Emperor Genocide that destroyed Paradox's world would never have occurred

However, Paradox decided to go about this in a different manner; rather than simply kill Pegasus, he decided to kill him at a large public Duel Monsters event, to scare the populace into thinking the game was the cause and make its popularity drop. If successful, this would cause a domino effect on the timeline, wiping Duel Monsters' influence from history. Paradox was aware there may be negative consequences, but believed it was necessary as many great evils threatened the world by using Duel Monsters.

Paradox traveled to the New Domino City, during Yusei Fudo's time. He interrupted a Turbo Duel between Yusei, Crow Hogan and Jack Atlas. Yusei has just Summoned "Stardust Dragon", but Paradox absorbed it into a blank card. He showed Yusei the corrupt card, when confronted, before vanishing through time again. 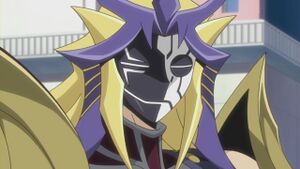 Paradox with his mask.

He traveled further back in time to Venice, during Jaden Yuki's time. Causing massive destruction, Paradox attacked Jaden with "Cyber End Dragon" and "Rainbow Dragon". Elemental Hero Neos protected Jaden, so Paradox Summoned "Stardust Dragon" to fight off "Neos". However, Yusei who has traveled back in time with help from the Crimson Dragon arrived and saved Jaden. Though unsure of how Yusei followed him back into the past, Paradox decides to let the alterations to the timeline finish him and Jaden off.

Paradox proceeded to visit an event where Pegasus was giving cards to young children, in Yugi Muto's time, where he used "Cyber End Dragon," "Rainbow Dragon" and "Stardust Dragon" to attack the area. Obsessed with the utter destruction of the "plague" that destroyed his home time, Paradox cared little for the other people in the area, killing them along with Pegasus and Solomon Muto with a falling building. Paradox witnessed the aftermath of his attack and claimed that with this the world had been saved. Yusei and Jaden arrived in this time and recruited Yugi, who was the lone survivor of Paradox's attack, to fight Paradox.

Yusei, Jaden and Yugi traveled back in time to exactly thirty minutes before Pegasus's event, scaring off the patrons to keep them alive. Paradox (from before his attack in the alternate timeline) arrived to stop them from interfering. He explained what his goals are and how despite their efforts, Yugi, Jaden, Yusei would be unable to prevent the world's eventual destruction. Enraged, the three challenged Paradox to a 3-on-1 Duel. Paradox accepted and transformed his Duel Runner into a hovercraft. 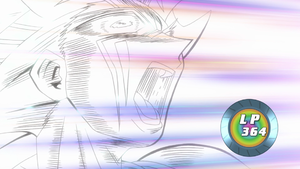 Paradox moments before his death

Paradox used "Malefic World" and his corrupt "Malefic" counterparts of existing monsters. Yusei, Jaden and Yugi managed to retrieve "Stardust Dragon" from him, but Paradox retaliated with "Malefic Truth Dragon" and pushed them into a corner. As he was about to win, Paradox taunted Yusei. However, with Jaden and Yugi's help, Paradox's final attack failed and the three overpowered "Malefic Truth Dragon" and won the Duel, which destroyed Paradox in the process. Right before dying, Paradox wondered if his experiment was wrong.

Z-one later mentioned Paradox when explaining his plans to Team 5D's, and Yusei recognizes his name and remembers his encounter with him. Z-one revealed that it was him who had sent Paradox to the past.[3] Before he died, Z-one said that by remembering Paradox, Antinomy and Aporia's bond he was able to find the strength to fight by himself, and that he considered the three to be his family.[4] 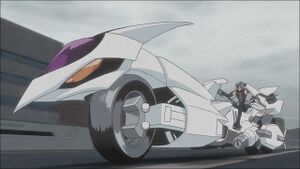 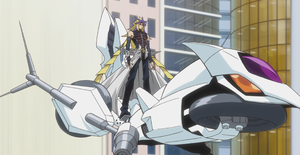 In Ground Mode, Paradox's Duel Runner operates much like other Duel Runners, allowing him to activate Turbo Duels. This is the form he uses when his Duel Runner travels through time and space.

When Paradox Duels Yugi, Jaden, and Yusei, he activates a flight mode for his Duel Runner. In Flight Mode, he can materialize his cards and manipulate the field itself.

Although not explicit in the movie, Paradox is an android much like Aporia and Antinomy. He is capable of creating corrupted versions of the signature cards of other Yu-Gi-Oh! characters in the franchise.

Paradox is capable of merging with his ace monster, "Malefic Truth Dragon".

Paradox has also demonstrated the ability to steal Duel Monsters right out of their cards (such as with "Stardust Dragon" during his Turbo Duel with Yusei) using a blank card, and the ability to bring them to life (he demonstrated this ability with "Cyber End Dragon", "Rainbow Dragon" and "Stardust Dragon" during his attack on Venice, and his attack on the Domino Duel Tournament).

Paradox plays a "Malefic" Deck, made of up of an archetype of DARK-Attribute Dragon-Type monsters (with the exception of "Malefic Cyber End Dragon" and "Malefic Parallel Gear", both of which are Machine-Type) which are corrupted versions of the trump cards of other Yu-Gi-Oh! characters, which he traveled through time to steal.

Paradox's preferred Field Spell is "Malefic World", which gives him the option of skipping his Draw Phase each turn, and instead adding a "Malefic" monster to his hand from his Deck. His monsters are supported by several Spell and Trap Cards that include the word "Malefic" in their names.