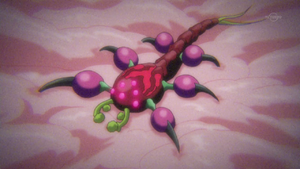 A Parasite Monster in its victim's brain.

Parasite Monsters are parasites that takes control of a person's mind. These parasites manifest in the host's Deck as the monster card "Fusion Parasite" and warp their strategy into one that utilizes Fusion Summon, regardless of their Deck's usual play style or the host's Dimension of origin. Despite their organic appearance, the monsters are advanced form of Real Solid Vision[1] and thus require control from their cards to function properly. 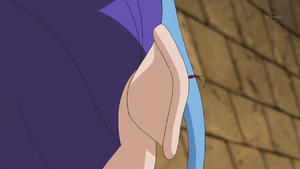 A Parasite Monster inside Celina's ear.

Parasite Monsters are created by The Doktor with Leo Akaba's ARC System.[1] They are developed to reside inside the host’s brain, allowing them to collect the host’s memory data and analyze them and have a strong control on the host's mind. The Parasite Monsters are programmed to make their hosts become loyal to The Professor. As seen with Celina[2], Rin and Lulu, the parasite monsters can make their hosts act as sleeper agents, allowing them to retain their normal personalities until the time is right.[3] As seen with Lulu, the true nature of the parasite is to suppress the original personality of that person so that they lose control of their bodies and most of their consciousness. If there is a strong enough external stimulus, it is possible for the host to break free of the parasite temporarily.[4] According to Aster, the host will be completely free from the influence of parasite when the Doktor is defeated.[5] Defeating the host will not free them from the Parasite's control, whether or not their "Fusion Parasite" cards were destroyed during the Duel or if the host broke free momentarily.[4][6]

The Doktor later put a Parasite into a Duel Academy student. The student was asked by Yuya, as to where Zuzu was. The student gave directions and smiled sadistically after Yuya left.[7]

Parasite Monsters are also able to quietly enter a host, as shown when one entered through Yuya's ear during his Duel with Celina and Lulu. At this point, however, it was also shown that Parasite Monsters can be repelled, as it invoked Yuya's awakening for a moment, allowing Z-ARC to immediately neutralize and destroy it.[6]

Zuzu, her counterparts, and the ones who are under the control of Parasite Monsters were freed and returned back to their normal selves after Leo carded The Doktor.[1]