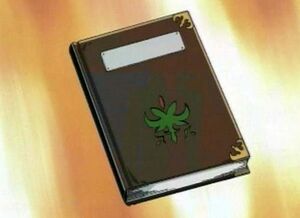 Pegasus' diary was a book in the anime, Maximillion Pegasus wrote explaining why he created Duel Monsters. He left it in for the winner of the Duelist Kingdom tournament to read. In the manga, the diary did not exist and Pegasus told everything in it directly to Yugi Muto.

The beginning of the diary addresses the new King of Duelists. (In the English version, it addresses Cecelia.)

It explains that Cecelia was Pegasus' lover, who died when she was 17. The two had met at a party in Las Vegas, held by Pegasus' father 14 years prior to when the diary was written. They were attracted to each other, and told each other their dreams; Pegasus' being that he wanted to be a painter and travel the world. The two vowed to always be together. However tragedy struck and Cecelia died of an illness. (In the English version, it also says that Pegasus and Cecelia got married and the day that Cecelia agreed to marry him was the happiest day of his life.)

Pegasus wrote that he went to Egypt to study reincarnation in the hope of seeing Cecelia again. (In the English version, he said he was determined to search the Earth for a way to reach her beyond the mortal veil and his travels led him to Egypt.) Here he met Shadi, who knew what Pegasus was going through, but told him to leave. Despite that, Pegasus followed him to an underground cavern. The guards spotted him and took him to Shadi, who was revealed to be the guardian of the Millennium Items. Shadi explained that the only way to leave the crypt is to be chosen by a Millennium Item, and so Shadi inserted the Millennium Eye into Pegasus' left eye socket. He explained it would either choose him and give him his wish or punish him for being unworthy. The eye chose Pegasus, and for a brief moment he was reunited with a vision of Cecelia. However, seeing her was not the same as touching her, but Pegasus was inspired to find a way to hold her again.

In the English dub, Teá went on to explain that later in the book, Pegasus plans to find a way to combine KaibaCorp's virtual technology with the magic of the Millennium Items, which would resurrect Cecelia completely.

After the Duelist Kingdom tournament, Yugi Muto inquired about the souls of Grandpa, Mokuba Kaiba and Seto Kaiba, who Pegasus had promised to free. However Pegasus was unavailable to talk having been attacked by Yami Bakura. Yugi, Joey Wheeler, Téa Gardner, Tristan Taylor and Bakura Ryou then went to the sanctuary in Pegasus Castle, where they found the diary and the "Cecelia Pegasus" card inside it.

The diary was written in English, whereas Yugi and his friends were Japanese. However Téa was able to translate it. (This detail is omitted in the English version, as the characters are always shown speaking English.) They empathized a bit with Pegasus after reading it.