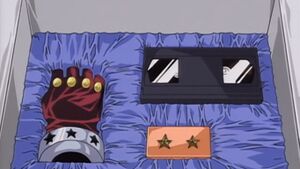 The videotape in a package.

Pegasus' videotape was an 8 mm videotape Maximillion Pegasus sent to Yugi Muto. Although it appeared to contain a prerecording, people on the tape were able to communicate with people watching as if they were present at the same time and location as them. 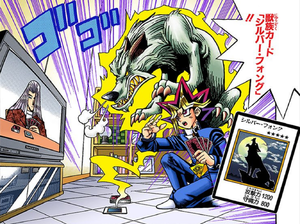 Pegasus sent the tape to Yugi in a package also containing a Dueling Gauntlet and 2 Star Chips. When Yugi played the tape, Pegasus appeared on the screen and challenged him to a game of Duel Monsters. In the anime, everyone else in the room froze while they Dueled, and the room was changed to a dark aura. In the manga, everyone else watched the Duel, and the room stayed normal. The cards came to life as they were played. Yugi realized that the game was a Shadow Game, so he got Yami Yugi to Duel.[1][2]

Pegasus was able to tell what cards Yugi was about to play, due to the power of the Millennium Eye. Yami, who was unaware of this, suspected Pegasus might be using subliminal messages to tell him what cards to play.[3]

Pegasus imposed a fifteen minute time limit on the Duel. As they played, he told Yugi a bit about the origins of Duel Monsters and his upcoming Duelist Kingdom tournament. The time limit eventually ran out, causing Yugi, who had fewer Life Points to lose. Pegasus then used the power of his Millennium Eye to take the soul from Grandpa and suck it into the TV.

Yugi communicates with Grandpa through the camcorder.

In the manga, Grandpa was trapped in the videotape. By inserting the tape into a camcorder, Yugi was able to communicate with him on its monitor and brought it with him to the Duelist Kingdom tournament, hoping to beat Pegasus and get him to return Grandpa to normal.

The package with the tape and the Illusion's Key.

During the Waking the Dragons arc, Pegasus sent the tape to Yugi and friends in a package also containing a Illusion's Key. They initially fear that he may snatch their souls, like he did with Solomon Muto at the beginning of the Duelist Kingdom, but this time, however, it's a regular video recording. In it, Pegasus says that he has found the reasons behind the recent monster attacks, and pleads of Yugi to go to the USA in a private jet.