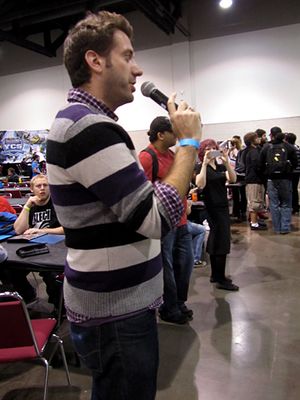 The Pegasus Ultimate Challenge is a special Pegasus Challenge tournament held rarely at major official events. Throughout the tournament, Darren Dunstan, the voice of Maximillion Pegasus, announces rule changes that change the course of the duel.

A fourth Ultimate Pegasus Challenge was held at 2018's 200th Yu-Gi-Oh! Championship Series in Columbus, Ohio. Players won up to 16 Turbo Packs or Astral Packs depending on how many rounds they won.[1]

Tournaments are conducted using the Advanced Format, with four Swiss-system rounds. Every few minutes, Pegasus, or another character voiced by a special guest, announces a change to the rules that players must abide by.[2] Players finish resolving an ongoing chain, but any other time, including building a chain, the changes are applied immediately. These rule changes are not card effects, and cannot be negated. Rule changes can fulfil the activation requirements for optional effects, but are not treated as your opponent's actions. Rules can be an action to be performed once, or a lingering restriction that can last for a specified number of turns or until the next rule change.[3]

At the Yu-Gi-Oh! Championship Series Providence 2012, the following are the special rules Pegasus could announce.[2]

At the 2015 North American World Championship Qualifier, Marik could announce rules that included the following.[5]