When Banner was alive, he had a close relationship with Pharaoh. He was rarely seen without him, even at official school meetings.

Vellian Crowler had a great dislike and fear of Pharaoh, often claiming that the cat had rabies or other diseases.

After Banner's spirit was freed from his artificial body, it began to live inside Pharaoh. Due to this, Pharaoh seems to be generally regarded as the head of the Red Dorm. Banner's spirit emerges to support Jaden several times throughout the series, but Pharaoh eventually swallowed his soul again each time.

In the last episode Pharaoh is the one who gives Jaden Yuki the note that was given to him from his friends before going out to his adventure.

Currently, Pharaoh, along with Lyman Banner's spirit, is travelling with Jaden.

In Yu-Gi-Oh! 3D Bonds Beyond Time, Pharaoh and Banner's spirit accompany Jaden during his search for Paradox. He is transported to the past and watches the Duel. Later he returns to his own time with Jaden. 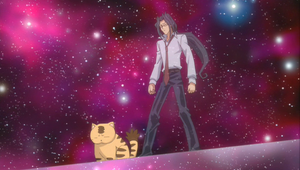 Banner and Pharaoh watching the Duel of Jaden, Yusei and Yugi.

In Duel Academy, there is a event in which the player can Duel Pharaoh. To achieve this event, the player must be a Slifer Red student and defeat Jaden Yuki, Syrus Truesdale, Chumley Huffington, and Lyman Banner at least three times. When it is Saturday, Banner will say he doesn't feel like dueling, he will notice that Pharaoh would like to Duel. By beating Pharaoh, the player will be reward with a card according to the duel outcome: a "Panther Warrior" card by winning, a "Bone Mouse" card for losing, and a "Outstanding Dog Marron" card for drawing.

Pharaoh in the Tag Force series.

Pharaoh appears as a special character in the first three Tag Force games. He can be encountered at various areas of the island, and the player is offered a choice to pet him on some part of his body. Guessing correctly will lead, in the first game, to have Pharaoh follow the player around for the day, but players can also choose to give him any sandwich instead. Having Pharaoh with the player leads to any conversations had with Tier 1 characters to always improve their relationship with the player regardless of the conversation subject.

In Tag Force 2 and Tag Force 3, as Pharaoh cannot follow the player around, guessing correctly instead greatly improves the player's relationship with their partner one time.