Photon Transformation, known as Photon Change (フォトン・チェンジ Foton Chenji) in the Japanese version, is a process used by Kite Tenjo to Duel in Yu-Gi-Oh! ZEXAL anime and manga series. When used, the user's outfit changes from black to white.

In order to protect his younger brother, Kite used "Photon Transformation" to hunt "Numbers" as it negated the effects of the "Number" cards that amplified hidden desires. When a "Photon" card was played, Kite's body lit up with the power of "Galaxy-Eyes Photon Dragon". 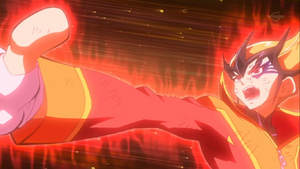 When Hart transferred his remaining powers to Kite during Vetrix's ritual, his clothes were covered with a red aura, giving him the ability to Xyz Summon "Neo Galaxy-Eyes Photon Dragon".[1]

Photon Transformation's power cannot be used for long periods of time, which is one reason for Kite to finish his Duels quickly.[2] It seems the more Kite uses this transformation, the more damage his body takes over time.[3] As the World Duel Carnival finals began, Kite had reached his limit. Tests that were administered by Orbital 7 revealed that if he continued the way he was going, he would die.[4].

In the second season of Yu-Gi-Oh! ZEXAL, the Photon Transformation no longer seems to have any effect on Kite's health, with him no longer seeming to be in pain when he uses it. However, he also does not carry as many "Number" cards, and does not Duel as often as he had as a Number Hunter.

In the Yu-Gi-Oh! ZEXAL manga, Kaito uses the Photon Change in his Duels to hunt the "Numbers" for his brother's sake. While in use, Kaito is not affected by the "Numbers" and the amplification of their desires.