From Yugipedia
(Redirected from Pierre)
Jump to: navigation, search

Pierre the Gambler, known in Japan as Mitsuo (ミツオ, Mitsuo) is Alexis Rhodes's childhood classmate and a world famous gambler, having mastered games from blackjack to poker.

In primary school, Pierre would play games of chance with other students, always having them bet their prized possessions. After losing a game of Duel Monsters to Alexis, he steals the red hankerchief she had bet on the Duel.

Years later, he arrives at Duel Academy where he asks Chancellor Sheppard and Vellian Crowler to let him duel Alexis. When they turned him down, he ended up taking out the Duel Academy security team that Chancellor Sheppard summoned until Alexis arrives agreeing to the duel. He finally duels with Alexis, but loses. In the end, it is revealed he actually has a crush on Alexis and returns the handkerchief to her. However, Alexis does not return these feelings and Pierre then leaves with Jaden Yuki trying to bid him farewell in the right way. 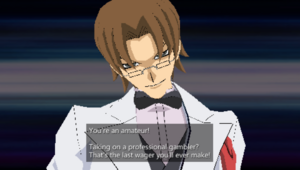 Pierre, in the Tag Force series

Pierre appears in the first three Tag Force games as an opponent and possible partner.

Pierre speaks with a French accent in the English dub. In the Japanese version, his nickname is "boy", and he seems to intensely dislike being called "Mitsuo".

In the European Spanish version, he has the nickname "el tahúr" (which refers to professional gambling or a person whose job is being a gambler).

True to his name and hobby, Pierre uses a Deck based on chance, namely involving coin tosses, which predominantly implement "Second Coin Toss" as his main Deck impetus.

The only card shown from the Deck he used in primary school was "The Snake Hair".