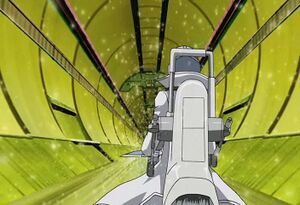 Jack in the pipeline.

The pipeline is a chute connecting Satellite and New Domino City. It is used to transport waste from New Domino to Satellite.[1]

Once a month, the pipeline is shut down for three minutes for maintenance.[1]

Jack Atlas and Yusei Fudo have each used the maintenance time to trespass into New Domino, via the pipeline.

Jack stole Yusei's first Duel Runner to do so and went to New Domino under Rex Goodwin's instructions, where he became the Dueling King.[2]

Yusei went through two years later on a new Duel Runner, in order to get back his stolen "Stardust Dragon" and Duel Runner from Jack. However, he was chased by Trudge, who forced him into a Duel. Yusei managed to win and get through the pipeline in time, leaving Trudge get pushed back by the inflowing waste.[3]