Ponta is the spirit form and "Number" Guardian of "Number 64: Ronin Raccoon Sandayu" in the Yu-Gi-Oh! ZEXAL anime. He was Girag's partner in his past life.

Ponta is a Tanuki (Japanese raccoon dog) with a black tail, hands, legs and eyes. He has 6 white whiskers and a red nose, the characteristics that appear on a person who is being possessed by Ponta. Unlike the other "Number" Guardians, Ponta is ethereal. After Ponta was revived, he gained a physical form.

Ponta has a habit of ending his sentences with "-da pon".

Ponta is capable of body-swapping with other people. When he does so, the person gains his whiskers and red nose. He can also switch his spirit with that of another person, placing their spirit into the body that he was previously occupying. He is also capable of transforming into other people, using this ability to transform into Souhachi Kiraku (the past-life incarnation of Girag) and acted as a body-double for him during battles and wars.

Years ago, Ponta was a pet and best friend of Kiraku. Ponta was a stray tanuki until Kiraku adopted him. He helped him in battles, acting as a body-double for him during battles and wars. After Kiraku learned that the vassals were not happy with him sharing the spoils of his victories with the peasants, he was forced to part ways with Ponta, knowing that he would lose his next battle. Ponta felt betrayed as a result. Unlike the other "Number" Guardians, Ponta was not killed in the past, with his spirit instead being sealed in a statue of Kiraku.[1] 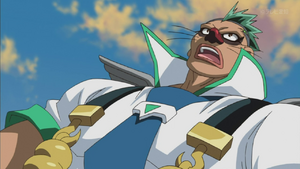 Many years later, Ponta was reawakened as a result of excavation near the Duel Sanctuary, which turned up a statue of Girag's past life, in which Ponta was sealed. When Girag approached the statue, Ponta emerged, possessing Girag's body. 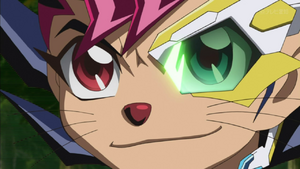 In his subsequent Duel with Yuma, Ponta attempted to manipulate the course of the game to his advantage by using his body-swapping powers when Yuma's first turn started, in order to place Yuma in Girag's body whilst he took over Yuma's.

Ponta proceeded to waste Yuma's hand on a series of bad moves before switching back, nearly winning the Duel had it not been for a Trap Yuma had Set before the switch. Ultimately, despite the handicap, Yuma managed to defeat Ponta. After the Duel, Girag recalled his past life with Ponta; he left him behind because he knew that he would lose his next battle. After this, Girag devoured Ponta, saying that he tricked him. He left for the Barian World, with Ponta's spirit still in his body.[1]

When Alito Xyz Summoned "Number 64: Ronin Raccoon Sanadyu", Ponta burst out of Girag's stomach and agreed to help Alito restore Girag's true past life memories. Then, when Girag's and Alito's souls were to be absorbed by Vector, Ponta appeared yet again and told Girag that he would never leave his side ever again. Afterwards, Ponta faded away and his soul, along with Girag's and Alito's, were absorbed by Vector.[2]

Ponta was revived after Yuma and Astral's Duel. He was seen on Girag's shoulder at Heartland Academy. He also joined Girag, Yuma and his friends on their journey to the Astral World to help Astral.[3]