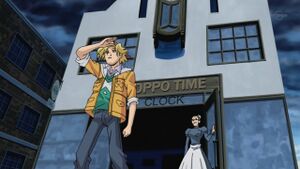 Poppo Time is the name of the clock shop in which Yusei, Jack, Crow, and, later on, Bruno live. The owner of the shop, as well as the landlady of the apartments behind it, is Zora.

Poppo Time appears to be situated in a major thoroughfare in New Domino City. Across the street from the Apartment is Cafe la Geen, Jack's favorite cafe.

Poppo Time looks similar to an old schoolhouse, made of bricks and whitewashed. A large dysfunctional Grandfather Cuckoo Clock is placed above the front door of the shop, with it's internal mechanism accessible in the second floor and the attic.

The apartment behind it has an underground garage which serves as the hangout and Duel Runner garage of Yusei and his friends. It is accessible to the street by a ramp.