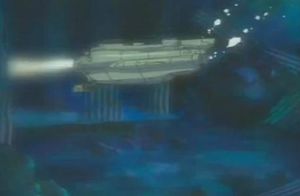 Poseidon 3 is a submersible, which was used by Arthur Hawkins to explore undersea as he studied Atlantis.

Hawkins used the submersible to find a city underwater. Despite warnings from the main ship, to stop his descent as he had passed a depth of 35,000 feet, Hawkins refused as he believed he was on the verge of the greatest discovery mankind has ever known. He drove the submarine to an area where air had been trapped and got out to explore. To his surprise, he found carvings and statues that look like Duel Monsters.