Bakura sought revenge for the sacrifice in which the Millennium Items were created. He hoped to kill the pharaoh and priests and take the items for himself. The priests underestimated the caliber of the ka Bakura would have and had difficulty fighting his Diabound. However Atem revealed himself to be the one capable of controlling the three gods and summoned Obelisk, forcing Bakura to retreat.

Moments before the battle, Isis sensed a disturbing future, using the Millennium Tauk. She warned her fellow priests that an evil shadow was approaching the palace; someone with incredible heka. Mahado's Millennium Ring also indicated a great shadow power.[1] 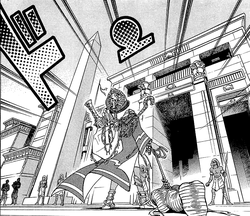 Bakura approached the palace, carrying treasure he had looted from Akhenamkhanen's tomb and dragging Akhenamkhanen's mummy behind him. When stopped by the guards, who asked who he was, he claimed that since he was wearing gold, he must a king. He demanded that they inform the pharaoh that Bakura, King of Thieves from Kul Elna had come to see him. He proceeded to fight off the guards and make his way to the throne room, just before the high priests were informed of his arrival.[1]

Bakura unloaded his loot, showed them the mummy and asked if they were not able to set better traps. He claimed to have come for the Millennium Items and asked if the priests were going to pass judgment on him.[1] Since stepping on the Pharaoh's throne unbidden was a serious offense, Shada warned Bakura that he would not be forgiven. Seto said that it took courage for a miserable thief to stand before the six priests and joked that they would make sure to use a larger canopic jar for his guts.[2] 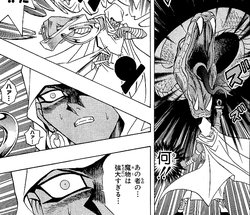 Shada, intimidated by the size of Diabound

Akhenaden explained that law and order is maintained by the Millennium Items, which can only be held by trained priests and divine pharaohs and if a person with a heart of evil were to touch an item, their soul would be burned away and the gods would punish them with death. However this only made Bakura more eager. Seto stepped up and said he would be the first to punish him with death.[2]

A slab was prepared for Bakura's ka to be sealed inside. The Millennium Scales, Ring, Tauk and Eye all began to react wildly to Bakura's evil. Bakura laughed at the notion of the items maintaining law and order, as he knew they were created by destruction and had shadow power hidden in them. He claimed to want revenge for the hidden dark past, pertaining to the birth of the Millennium Items. On using the Millennium Key to look into Bakura's soul, Shada was shocked by the site of a massive ka, Diabound, and warned the others that the slab would not be big enough to contain it.[2] 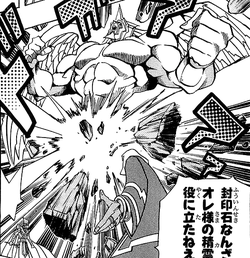 Diabound, breaking free from the tablet

Bakura summoned Diabound, before the priests, who were stunned by its size. Akhenaden asked how such a demon could dwell in the soul of a mere thief. Bakura replied that Diabound was not a demon, but Diabound, the Beast Spirit of Death. Siamun Muran thought it was impossible for a god ka, a holy spirit, to exist within an evil heart. Bakura questioned his definition of evil. By the priests' standards of justice, he believed himself to be "good", as long as he is loyal.[2]

Seto used the Millennium Rod to cast Diabound into the tablet. He seemed successful at first, but the tablet began to crack and Diabound broke free.[2] 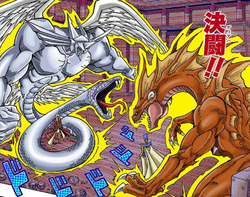 Seto stepped up to battle Bakura, believing his power to be enough to defeat him, despite Akhenaden's suggestion that the priests combine their power. He raised a tablet to summon Galestgoras, a demon from the Shrine of Wedju. Believing himself to have transcended above the level of a common criminal, such as the one Galestgoras was taken from, Bakura remarked that it was impossible for it to defeat Diabound.[3]

Galestgoras bit Diabound on the arm, managed to subdue the attack from its snake appendage and slam Diabound on the ground. As it attempted to deliver its finishing blow, Diabound used its power to move freely through solid matter to evade. It then made its way into the tablet Galestgoras was summoned from and destroyed it, causing Galestgoras to disappear.[3]

Bakura challenged Atem, offering to wager his head for Atem's life, treasure and the Millennium Items. When Atem questioned his interest in the items, Bakura tugged on Akhenamkhanen's mummy and said he should ask him. He stated that Akhenamkhanen was the one who brought the Millennium Items into the world. Despite Akhenaden's objection that he did so in the interest of creating peace, Bakura claimed the items were forbidden artifacts of dark magic, which can be used to forge a contract with the great evil god, Zorc Necrophades. As Bakura pressed his foot on the corpse and suggested Akhenamkhanen had selfish motives, Atem got annoyed and stood up, telling Bakura not to touch the body.[4]

The six priests decided they had had enough of Bakura's disrespect and summoned a dragon, Bastet, Spiria, Magus of Illusion. Diabound easily destroyed the dragon with its fist and Bastet with its snake appendage.[4] 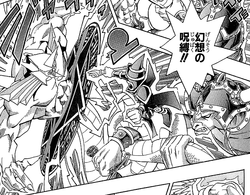 During the battle Atem walked over to Thief Bakura, pushed him aside and picked up his father's body.[4] The priests worried that Atem had made himself vulnerable by getting so close. Mahado prepared to protect him with Magus of Illusion, but Seto lacked confidence in the power of Mahado's ka and summoned Battle Ox, instead. He ordered Battle Ox to cut Diabound in two and while it failed to do, he instructed Mahado to use the opening it created to attack Diabound. Magus of Illusion cast the "Curse of Illusions", restraining Diabound and preventing it from using its wall-phasing ability.[5] 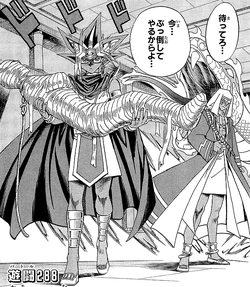 Atem, taking his father's body back from Bakura

While carrying his father's body, Atem thought he heard him say "justice lies in the name of the gods". Atem carried the body over to Siamun, who was upset to see Akhenamkhanen in that state, but told Atem to rest assured the king would have revenge when the priests delivery heavenly judgment on Bakura. Atem insisted that the body was not a king, but his father.[5]

Gadius, Magus of Illusion, Battle Ox and Spiria continued to battle Diabound, but Bakura was aware that it was taking a toll on their priest's ba. Diabound used its "Spiral Surge" ability to break free from the "Curse of Illusions" and proceeded to attack the priest's remaining ka. As they worried about how they were to defeat such power, Atem asked them to stand down and declared that he would fight.[5]

Bakura believed Atem could not win, regardless of what ka he summoned. However Atem recalled his father saying that justice lies in the name of the gods and with that was able to summon Obelisk, one of the three figures of the gods, from the Shrine of Wedju.[5] Bakura and the priests were surprised to learn that Atem was the chosen pharaoh, prophecized the inherit the names of the three hidden gods and the power to wield them.[6] 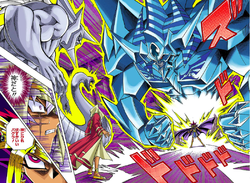 Atem warned Bakura that he would not forgive the person trying to steal the Millennium Items, which were forged by his father's dreams of freedom and peace. Bakura derided his use of the words "freedom" and "peace" and claimed the items were made from both good and evil and will respond the evil within the heart of whoever possesses them and drag them into a world of evil. He accused the pharaoh and priests of killing anyone who frightens them in the name of justice and asked if it was really justice. He suggested that what they really fear is their enemy's idea of justice and that nobody can draw the line between good and evil, which is something only the Millennium Items can tell. He invited Atem to look at his priests and asked if he can be sure that there is not one who covets his throne, much to their disgust. Bakura said that he also claimed justice was on his side and that he would kill all of them, make himself pharaoh and use that position and the Millennium Items to rule the world. Atem also questioned Bakura's assertion of justice, by pointing to his acts of murder and grave robbing.[6]

Bakura ordered Diabound to kill Obelisk and surpass the power of the gods. It used its "Spiral Wave" attack, which had little effect. Obelisk in turn used its "God Hand Crusher" attack to strike Diabound, considerably lowering Bakura's ba. With some ba left, Bakura used Diabound's wall-phasing power again to retreat with it through the palace wall.[6]

Bakura retreated to the outskirts of the kingdom, where he looked back at the palace. He laughed and commented that the attack was only the prelude to the fall of the dynasty.[6] Search efforts were made to find Bakura. While Akhenaden and Seto discussed the search's progress, Seto deemed Bakura too dangerous to be kept alive. They worried that the ka gathered in the Shrine of Wedju were not enough to compete with Diabound, which Seto accredited to them only collecting ka from criminals. However Akhenaden reminded him that Bakura was also a sinner and theorized that his ka's strength came from his level of hatred. He suspected that Bakura may be a survivor of the Kul Elna massacre and admitted to Seto that Bakura had been right about the Millennium Items having an evil side. He confirmed that the items could indeed be used to forge a contract with the great evil god and for that reason they could not allow Bakura to have them.[7]

Seto proposed that they conduct a ka hunt, where they would take civilians with promising-looking ka and inflict agony upon them. This would provoke hatred and strengthen the ka, which could be turned into weapons. Akhenaden thought the idea was insane and knew the pharaoh would not consent. Seto rationalized that in having the stature of a god, the pharaoh must maintain peace, but in desperate times, it would be necessary for the priests to employ shadow politics to protect the royal house.[7]

Akhenamkhanen was buried again three days after the attack and the priests engaged in mock Diaha to prepare themselves for further attacks.[8]

When Atem played the Shadow RPG, he reenacted moments of his life as pharaoh, including this battle. This time he had no memories of his life in ancient Egypt, but had new memories of the modern world.[9]

In this reproduction, he recognized Thief Bakura as Dark Bakura, due to them having the same name and the motive to steal the Millennium Items. He also noted the similarities between Diaha and Duel Monsters.[3]