Principal MacKenzie or Mr. MacKenzie (Mr.マッケンジー, Misutā Makkenjī) is the head of the American Duel Academy, Reggie's father, David's adopted father, and the main host of Tragoedia. He sends the Overseas Champions to the Japanese Duel Academy. 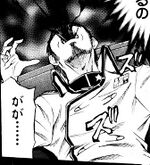 MacKenzie is possessed by Tragoedia as his daughter, Reggie watches on.

MacKenzie is the main host of Tragoedia. Through MacKenzie, Tragoedia obtained the Legendary Planets from Mr. Phoenix and began his quest to obtain the spirit cards. Aware of the dark presence within her father, Reggie begins working against him to free herself of him, while appearing to help him in his quest at the same time. MacKenzie is also the adoptive father of David Rabb, though whether or not he adopted him before or after his possession by Tragoedia is not specified. MacKenzie tells Aster to meet him in a warehouse, where Aster finds the unconscious bodies of Atticus, Reggie, Jesse, Axel and Jim, their energy drained by Tragoedia. Aster confronts him, but MacKenzie Summons his ace monster, "The Supremacy Sun".

Shortly after Aster's confrontation, Aster is defeated. Just as this occurs Chazz Princeton and Jaden Yuki arrive at the location and prepare to Duel him 2-on-1. MacKenzie then gives Jaden his "Elemental Hero Terra Firma" and "Winged Kuriboh" cards back saying that he has used them for the purpose that he has wanted them for. During the Duel, the two fight cooperatively, but fail in stopping MacKenzie from Summoning his ace monster, who begins to plague them throughout the Duel. After Tragoedia's defeat, MacKenzie is freed from his control at last, and returns to the American Duel Academy.

MacKenzie's Deck while possessed by Tragoedia is centered around his ace card "The Supremacy Sun" whilst supporting it with cards based around Egyptian mythology.