Professor Frank, simply known as The Professor in the dub, is one of Goodwin's 5 Dueling Assassins placed in the Fortune Cup with the intent of exposing the Signers, as well a member of Iliaster.

In the Japanese version, Professor Frank has a catchphrase "sa", which he says 3 times. "Sa" is used in Japanese to beckon somebody. In the dub, this is replaced by a constant usage of analogy and simile, both regular and homeric.

His first match is unseen, but it is mentioned that he lost to Commander Koda on purpose, specifically so he could be in the consolation game. In the Duel, he hypnotizes Luna, then enters a trance that allows him access to the Duel Spirit dimension (specifically, the "Ancient Forest").

His mere presence appears to be able to destroy the forest. As such, the forest's guardian, Ancient Fairy Dragon, attempts to kill him to save its home; Luna ends the Duel in a DRAW to save him. 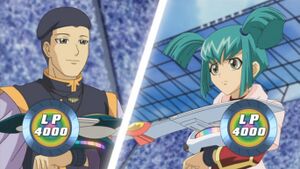 Frank plays a Psychoanalysis-themed Disruption Deck whose cards are based off various aspects of the Eponymous School of Thought as seen with the cornerstone card, "Ido the Supreme Magical Force". These cards have various effects from revealing opponent's cards to effect damage.