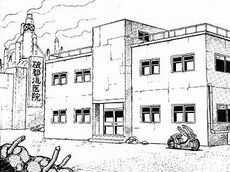 Puzzle Hospital is a hospital in Satellite, existing in the Yu-Gi-Oh! 5D's manga.

Yusei Fudo takes Sect Ijuin here after he is injured by the Skeleton Knight. Yusei is forced into a Duel with Jack Atlas on the way. This results in more injuries for Yusei and Sect, which need treating.

The only member of staff shown is a single doctor, who tends to Yusei and Sect. Yusei refuses to tell her what happened, the night he and Sect arrived and disregards her advice to get rest, in favor of repairing his Duel Runner.

Outside the hospital, Yusei meets Lazar, who invites him to participate in the D1 Grand Prix.