The Pyramid of Alexander the Great

The pyramid is located in a jungle in India, rather than the usual Egypt.[1]

The inside of the pyramid contains numerous traps. These include:

Some of the inside walls have murals, including one depicting the Weighing of the Heart.[1]

One of the floors contains a giant map, which functions as a board for a realistic version of the Capsule Monsters game. Stepping on the map transports people to the game world.[1]

At one point in his life, Alexander the Great controlled Egypt, making himself a pharaoh.[1] 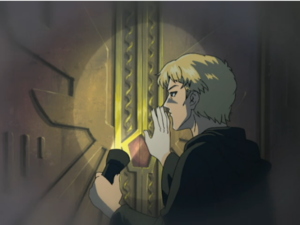 The pyramid was said to contain an ancient game. This caught the interest of Solomon Muto, who along with Alex Brisbane located the pyramid in and were puzzled as to why it was not in Egypt. As they explored it, Alex suggested that they split up, leaving Solomon examine their current level, while he went upstairs. After being blocked by a locked door, Alex returned to where he left Solomon. However Solomon had disappeared and his bandanna was found down a flight of stairs, near the giant map.[1]

Outside of the pyramid, Alex encountered Solomon's grandson, Yugi Muto and his friends Joey Wheeler, Téa Gardner and Tristan Taylor. He brought them to the pyramid and told them what had happened to Solomon. As he navigated them around the pyramid's traps, Téa noted how much he knew about the pyramid and became suspicious of his claim that he had only been in it once before. Alex brought the group to the map where Solomon disappeared. Joey stepped on it, unaware that it would send him to the game world. He was soon followed by Yugi, Téa and Tristan, who figured it was the only way to rescue Solomon and Joey.[1]