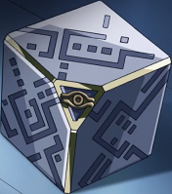 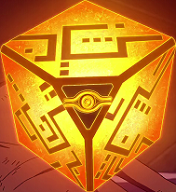 The Quantum Cube, dimmed and illuminated

The Quantum Cube (キューブ Ryōshi Kyūbu) is a mystical object of great power used by Aigami in Yu-Gi-Oh! The Dark Side of Dimensions. It previously belonged to Shadi Shin.

According to Sera, the Quantum Cube is the eighth Millennium Item.[1][2]

Shadi had used it to kill an abusive man who once lived with some orphans, including Diva, Mani and Sera. After his death at the hands of Yami Bakura, Shadi handed the Cube over to Aigami.

Diva later used it to transport Scud and his gang to another dimension, and used it to teleport from the mall in Domino City to the Valley of the Kings in Egypt, where he disintegrated a KaibaCorp employee, and attempted to kill Kaiba with it, albeit unsuccessfully, then attempted to kill Ryo Bakura and Joey Wheeler with it. In the latter instance he was foiled by Atem. While in the Valley of Kings, he transformed it into a Duel Disk to Duel Kaiba, and later to Duel against Yugi.

After Dark Diva's defeat, Kaiba took possession of the Cube, using it to enter the afterlife in order to Duel Atem.

Using the cube, Diva can transport people to an alternate dimension, where they will disintegrate and die if not rescued. It can also directly disintegrate people.

The world he sent Joey to was made up of and sustained by his memories, and as soon as he forgot something, it would disappear. However, Joey could also remember things to recreate a place, such as the street he rode his bike down earlier.

KaibaCorp's virtual technology is capable of combating its power, as Seto Kaiba mocked Diva's effort to disintegrate him with his own power and counteracted it.