Queen (クイーン, Kuīn) is a character appearing in the Yu-Gi-Oh! VRAINS anime and an antagonist in the second season. She is the CEO of SOL Technologies. During the third season, her possession of one of the keys to SOL Technologies causes her to be targeted by Ai. Following Ai's defeat, Queen's whereabouts and status were left unknown, and she was never mentioned again after that Duel. 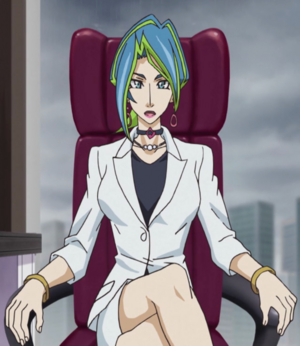 Queen in a business suit.

Queen is a pale-skinned woman with teal eyes and neck-length teal hair with bright green highlights.

Queen is introduced in swimwear, which is composed of a long cream dress open over a black bikini, teal short-shorts, and large sunglasses. Later on she was shown in business attire, a white V-necked skirt suit over a black camisole. Both outfits are accessorized with gold bracelets, a black collar with a pink buckle (shaped like a square "Q"), pink hoops earrings, and a black necklace with three light lavender beads.

During the third season, Queen dresses in more formal attire for the party on her ship. She wears a magenta dress with black sides, a golden bracelet on her right wrist and her Duel Disk on the other, and black and white high-heeled shoes.

Like many of the higher-up employees at SOL Technologies, Queen's name is derived from a chess piece.

Queen talked with Akira Zaizen over hologram, who asked why they had to hunt for Playmaker. She noted that he'd become quite bold after being promoted to his former position, and explained that since the Knights of Hanoi had been defeated and the Cyberse destroyed, Playmaker was their only lead to finding the Ignis. She placed Zaizen in command of using Bounty Hunters to find Playmaker and the Ignis, threatening to fire him if he failed.[2]

Queen ordered the A.I. Dueling Chip to be trialed on George Gore, and she had Zaizen offer Gore the chip.[3] After several failures by Zaizen and his Bounty Hunters to capture the Ignis, Queen called him to another meeting. Zaizen apologized for his failures, and Queen asked how his special mission was going. Zaizen confirmed that Gore was undergoing the training that Queen had requested for him, and Queen warned Zaizen that her company did not accept failure to achieve results before cutting the connection.[4] Queen personally intervened when Zaizen tried to have Gore's training with the A.I. Dueling Chip stopped for fear of risks to Gore's life. Gore was unconcerned with the dangers, and Queen stated that the chip would bring in a lot of wealth for SOL Technologies if it were successful.[3]

Queen ordered Risa Hayami to have The Gore sent to LINK VRAINS after the Earth and Water Ignis when they were spotted, overruling Zaizen again.[5] Gore was able to capture the Earth Ignis, and Queen ordered her staff to log Gore out before he could Duel Playmaker to ensure the Earth Ignis's retrieval. That night, Queen oversaw and ordered the dissection of the Earth Ignis to collect its data into a form that SOL Technologies would be able to understand and convert into a high-performance Ignis once merged with the other five, ignoring the Earth Ignis's cries that it was alive and had free will.[3][6]

Queen gave the Earth Ignis's data to Gore, and had it implanted in his A.I. Dueling Chip to collect more data on the process and aid Gore in collecting the Ignis for her. She continued to oversee his progress, and sent him to LINK VRAINS to use the Earth Ignis's data to lure Playmaker and his allies. Zaizen informed her when Playmaker and his team logged in, though Queen knew of their presence already. She confirmed her intention to send Gore after Playmaker, but did not inform Zaizen that she had given the Earth Ignis's data to Gore, nor that he was already logged in and she disregarded Zaizen's concerns for Gore's safety. When Gore revealed to Playmaker that he had the Earth Ignis's data in his chip, Queen confirmed to Zaizen that she had ordered it added to Gore's chip.[7] As the Speed Duel between Playmaker and Gore continued, Zaizen continued to voice his concerns over Gore's safety, and Queen ordered him to leave if he could not remain quiet. Gore was eventually defeated by Playmaker, and Zaizen ordered him logged out, but Queen instead ordered Gore's capture unit to be activated to capture Playmaker and the Dark Ignis. Zaizen openly defied her, manually logging Gore out himself and asking Queen if she wanted to make them murderers.[8]

Queen did not take any further action during the Ignis War, and LINK VRAINS was shut down after Bohman's victims were revived. As a result of his role in stopping Bohman, Zaizen was promoted to Executive Director of SOL Technologies, just below Queen, an action even she could not oppose. Instead she directed her efforts towards marketing the SOLtiS androids, attending a party on a cruise liner staffed by them, and she and the captain discussed the capabilities of the SOLtiS'.[9]

Queen retired early that night rather than continue to enjoy the festivities. As she was sleeping she was visited by two rouge SOLtiS, the elder of which revealed himself to be Ai, the Dark Ignis and the younger called themselves Roboppi. Ai told Queen that he intended to use SOL Technologies in his plans and avenge the death of the Earth Ignis at her orders, but offered to give her a sporting chance and Duel him for the key. With a single touch he brought Queen to his personal digital world to Duel. Queen accepted Ai's challenge, angered by his arrogance. She swiftly brought out "Golden Allure Queen" and "Allure Queen LV7", raising the ATK of "Golden Allure Queen" to 5000 and protecting it with "Allure Palace" and "Allure Dance", but Ai claimed he would break Queen's field easily. Using Link, Synchro and Xyz Summoning, he brought out "Dark Templar @Ignister", "Wind Pegasus @Ignister" and "Light Dragon @Ignister" and used their effects to destroy Queen's Spells and then her monsters, leaving her wide open. He attacked directly with "Wind Pegasus", but refusing to lose, Queen cheated by using her "Honey Trap" Skill during the Master Duel, regaining her depleted LP and Setting "Drowning Mirror Force" from outside her Deck. Ai revived his "Linguriboh" and continued attacking, negating "Drowning Mirror Force" with "Linguriboh" and defeated Queen.[9]

As a result of her defeat, Queen's data was taken by Ai and she was left comatose and in critical condition. She was rushed to the hospital and presumably freed after Playmaker defeated Ai.[9][10] Queen's final fate is ultimately not revealed, but three months after Ai's defeat, Zaizen had become the CEO of SOL Technologies.

Queen uses an "Allure Queen" Deck, focused on swarming the field with her "Allure Queen" monsters and providing fuel for their effects, allowing her to increase the ATK of her "Golden Allure Queen" to high Levels and limit her opponent's attacks and targeting card effects. Her Skill is "Honey Trap", which allows her to Set Trap Cards that are not even in her Deck when it is used and activate them in the same turn. She can use this Skill in a Master Duel.