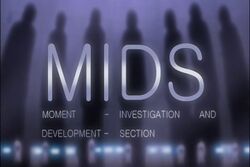 The R.R.D. which stands for Reactor Research Division, known as M.I.D.S. in the original, which stands for Moment Investigation and Development Section, is a group of scientists belonging to Kaiba Corporation.

The leading developers within the Reactor Research Division were the parents of Yusei Fudo. Mr. Fudo's assistants at the time were Rex and Roman Goodwin. However, after Yusei's father wanted to cancel the Ener-D project due to the risks involved, Roman instead became the new head researcher, which ultimately led to the devastating Zero Reverse incident.

Prior to the plot of Yu-Gi-Oh! 5D's, Professor Fudo was the one who discovered what the Moment (known as Ener-D in the English anime) technology was. This technology came across to him because of the research he was conducting, which would be known as the "Planetary Particle". Later, because of his new Enerdy research they were able to build a first system known as the Ener-D Reactor.

However, because of many conflicts with this project he was relinquished of it. After that Roman gained control of it, that is when a disaster occurred. At that time he was a Signer who then choose to instead become one of the Dark Signers. So that in order to be reborn as one, Roman killed himself by overloading the system which ultimately lead to the disaster known as the Zero Reverse Effect. One which caused Domino City to be split, along with claiming the lives of Yusei's parents.

After that, according to what Mina told to the journalist Carly Carmine, R.R.D. went to the task of concealing the truth of this incident to the world. They had manipulated all information so that the people believed that instead it was all caused by a natural disaster, as it sounded more convincing.

Though Carly knew the truth and was ready to write about it, she is warned not to as R.R.D. has completely convinced people so much that it is unknown if anyone would actually believe her. To make matters worse, nobody has dared to confront them due to the fear of being sent off to Satellite.