R6 was first owned by Asana's great-grandfather, who often took Asana for rides in it when she was young.[1] They once rescued Chevelle Kayama and Trapigeon using it.[2] Asana later inherited R6 herself. Following the acquisition of Mutsuba Heavy Machinery by Goha Enterprises, the production of Heavy Cavalry components was phased out and Asana's refusal to use other parts resulted in R6's slow deterioration.[3]

R6 broke down in the forest on the outskirts of Goha City due to a loose circuit, which was fixed by Yuga Ohdo. As thanks, Asana taught Yuga to operate R6, spending the afternoon with him.[4] Asana used R6 while discovering the Dark Rush Duel Tournament, holding a moment of silence when she believed it wished to speak, and she Dueled atop it during her Rush Duel with Yuga.[1] 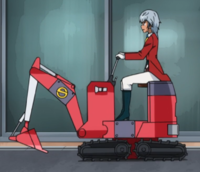 R6, after being modified by Yuga.

While she was cleaning R6 one day, Asana discovered a damaged panel on the Heavy Cavalry and bandaged it tenderly, reassuring R6 that she would replace the damaged area.[5] Asana took R6 to the Mutsuba mine to pursue Yuga and his friends, and she Dueled atop R6 during her second Rush Duel with Yuga, asking it to hold on a little longer. When Asana's "Wyrm Excavator the Heavy Cavalry Draco" clashed with Yuga's "Supreme Machine Magnum Overlord", R6 was damaged by the battle.[6] R6 continued to break down during the Duel, and despite the efforts of the Heavy Cavalry Duel Club to hold it together and maintain it, R6 was destroyed by the Duel. Afterwards Yuga revealed R0, the Mutsuba Style Mobile Duel Device that had been modified over the course of its construction and convinced Asana that modifications were acceptable, and she allowed him to rebuild R6 using other parts.[3]

Asana brought the rebuilt R6 with her to Maximum Mountain when Luke asked her if he could dig there for Duel ID cards.[7] She left R6 outside while investigating Goha 66 with her friends, but later called it to her to Duel Tiger.[8][9]

Asana used R6 while meeting with the Rush Duel Club to help Tiger after she lost to The☆Lukeman, giving Yuga a ride on the back while they headed to Tiger's outcrop. She also used it to Duel Nail Saionji.[10]

After Asana learned that Yuga might be the sixth of the Goha Siblings, she went to Yuga's Road Laboratory on her own, save for R6, who rumbled to assure her there was no way Yuga could be a Goha President. When they met Roa Kassidy, Gavin Sogetsu, Romin Kassidy and Mimi Imimi on the way, Roa greeted Asana as "pretty baby" and Asana conveyed R6's request for a greeting, resulting in Roa greeting R6 as "pretty baby" as well. Asana told Roa that R6 was not a "baby" but a gentlemen considering it was older than he was. After she learned Roa and the others intended to investigate whether Yuga was the sixth Goha Sibling or not without asking him, Asana challenged them to a Duel and Roa accepted. Asana Dueled atop R6, R6 fulfilling the role of confirmation for Asana's moves in place of her clubmates. Roa eventually defeated Asana, blasting her off R6, and she left gracefully. Asana and R6 then found Romin in a different outfit and realized the Romin they had met was an imposter, taking the real Romin to where Roa, Gavin, Mimi and the imposter Romin were, where they made up after Nanaho Nanahoshi revealed her deception and left.[11]

R6 is a model of the easy to use but extremely powerful "R" series of Heavy Cavalry. With a Duel Disk included, it's quite useful in multi purpose, and its ease of maintenance makes it extremely popular among the Mutsuba Heavy Machinery Customer Base.[12] R6's Duel Disk is built into its bucket, which also contains its Solid Vision projectors.[1]

Asana herself treats R6 as a living machine, a courtesy afforded to it by the rest of the Heavy Cavalry Duel Club and Yuga Ohdo, and R6 appears to respond in kind by rumbling its engine. She reacts to finding damage on it as if it was a wound, bandaging it in the manner one would treat a cut. She appears to view the machine as male, as she claims it calls itself a "gentleman" in comparison to Roa Kassidy

R6's name is drawn from both its posterior, which forms a perfect "R" shape according to Asana, and the six motif associated with both Goha Enterprises and Goha 6th Elementary.