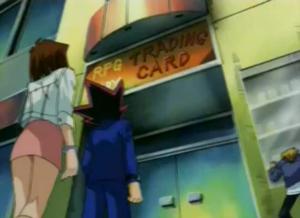 In the shop's basement was where Pandora set up his special Duel arena, Pandora's room, against Dark Yugi, where the loser's legs will be sawed off by a buzzsaw. Dark Yugi rushed to the shop after realizing the shop owner was working with the Rare Hunters, and met Pandora instead.

This was one of the places Yami Yugi and Téa Gardner went on their date. Yugi bought Booster Packs here and got the card "Lightforce Sword".[1]

Before the Battle City tournament, Yugi Muto and Joey Wheeler went here to collect their Duel Disks, along with Téa Gardner and Tristan Taylor. The three boys ogled over the cards on display at the window before entering. The card shop manager gave Yugi a Duel Disk, but Joey's rating was too low for him to get one and was initially not given one. However the manager saw that Joey had "Red-Eyes Black Dragon", so he pretended that there was a mistake on the computer and upped his rating, allowing him to take a Duel Disk. After they left, the manager phoned some Rare Hunters to go after Joey to win his "Red-Eyes".[2]

In the shop's basement was where Arkana set up his special Duel arena, against Yami Yugi, where the loser's legs will be sawed off by a buzzsaw (in the dub, the buzzsaws were changed to Dark Energy Discs that will banish the loser's mind to the Shadow Realm). Yugi was lured into a tent and into a magic box that teleported him into the shop, where he met Arkana.

In Yu-Gi-Oh! The Sacred Cards, RPG Hobby Trading Cards, usually referred to as simply the card shop is available to the player after they meet Marik Ishtar in the toy shop.

There were two generic Duelists outside the shop. The player could Duel one of them. The other would not Duel the player, as she needed to make some adjustments to her Deck. She later lost to a Duelist, using an occult Deck.

Inside the shop, the player could by and sell cards with the card shop manager and could make new cards appear in the shop, using the password machine. The manager had an assistant, who blocked the player from entering the basement. When the player challenged him to a Duel, he jokingly played along and pretended to call Arkana, but then said that the manager would be furious if he did.

Following Arkana's defeat, the manager left and his assistant assumed the managerial position, buying and selling cards. He informed the player that the previous manager had gotten sick and returned to his home in the country. The new manager accepted Duels from the player.